Crusade: "Patterns of the Soul" 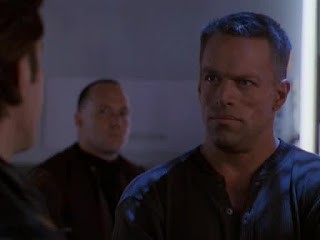 The Excalibur is diverted to a human colony on Theta 49, where the population may have become infected with the Drakh plague while fleeing Earth. While exploring the planet Dureena makes an unexpected discovery - a long-lost community of her own species.

Here's the thing about Crusade: it is almost impossible to feel fully engaged by it. It has a cast of characters, and it has a setting, and those characters move through that setting having adventures. Things happen, and those things affect the characters, and the bottom line is that I struggle to care. The episodes that have worked so far have done so just barely. They have been reasonably engaging diversions, but they have not added up to anything that has made me enthused about seeing the next episode. Five episodes in and I am struggling to remember the characters' names.

The way I've been reviewing TV episodes is with a binary good-versus-bad scale. That then adds up to give each season of a series a percentage score. It works in broad terms, and it's simply enough, but with a series like Crusade it just does not work. Three out of four episodes to date - okay let's not waste time on what I thought of this episode, three out of five - gives the series a quality ratio of 60 per cent, but the truth is the ones I liked I only liked enough to watch without wincing too often. This is a really mediocre series. You could blame TNT to an extent, since they tried pretty emphatically to interfere with the production against Straczynski's wishes, but then you can also read Straczynski's comments where he discusses how great he thinks an episode like "The Long Road" was and it really, really was not.

A lot of the problems with Crusade boil down to how Straczynski writes his shows. I am not going to sugar-coat it, and most readers will know my opinions of this by now. He is, by most normal measures, a pretty mediocre writer. His dialogue leaves much to be desired, and while he can write the hell out of a monologue he is writing for a medium where monologues are of fairly limited use. Where he does excel is in layering in multiple long-running plot threads that hook a viewer in, soap opera style, and slowly get them addicted to the long-form narrative. It worked a charm with Babylon 5. The first season was relatively dreadful, but the second was pretty good, and the third and fourth wound up fairly great. The dialogue still sucked on the whole but viewers didn't care because the plot was sustaining their interest and entertaining them.

A bit part of why the fifth season was so underwhelming was that most of those long-running plot threads got resolved at the end of the fourth. As a result it took Straczynski half a season to build up some momentum again and get a few half-decent episodes out before the series wrapped up. Crusade is in the same boat. You can see him laying in a few mysteries here and there, and developing some back story, and this episode appears to set up some kind of dangerous corruption within Earthforce, but we know this series is only 13 episodes long and we are never going to see these threads resolved or even properly developed.

As for this episode in particular, it is nice to see archaeologist Max Eilerson (David Allen Brooks) and Dr Sarah Chambers (Marjean Holden) get a bit of attention. They're both purportedly part of the main cast but we've barely seen them since the pilot. Then again, so is Tracy Scoggins and she still has not turned up. There is a surprisingly strong and engaging guest performance by Brian Thompson, who gets a much more normal and relatable character than he is normally given. Beyond that, however, it is all rather dull. Things happen, but I struggled to care about them. It is just so crushingly generic. Its writer, Fiona Avery, was hired as the series' archaeology advisor and wound up writing two episodes. It's great that she was given the break, but I do feel they would have been better served using more experienced writers until the series found its feet. Five episodes in, and it is still not finding them. The quality ratio slips to 60 per cent.
Posted by Grant at 4:37 PM