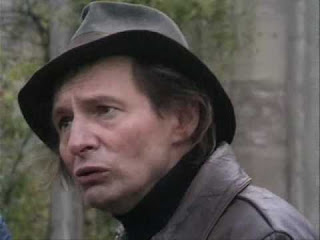 The commune finally seems to be functioning, although with so much farming to do and so little time before the rains it will take everyone's collective efforts to get the fields planted in time. To boost morale the survivors hold a party. The following morning one of them lies dead in her bed, and the horrifying realisation dawns that one of the group has murdered her. Finding the killer is one problem - what to do with them in a world without police or prisons is another.

Quite frankly if Survivors never had another episode the series' existence would be justified by "Law and Order". This is one of my favourite episodes of any British telefantasy series. It presents a starkly horrible situation without any easy solution or escape, and refuses to pull its punches from beginning to end. The script by Clive Exton (writing as M.K. Jeeves) is bold and provocative, and the series cast - there are no guest stars here - uniformly rise to the occasion. I first saw this episode about 20 years ago. I have never forgotten it.

For the characters the situation seems horrible enough. Wendy (Julie Neubert) has been stabbed to death in her bedroom. The following morning the mentally challenged Barney (John Hallet) tries to run away but is caught by Greg (Ian McCullough), Paul (Chris Tranchell) and Arthur (Michael Gover). He carries a blood-stained arrow with him. After an agonising interrogation and debate, the majority of the community agree that Barney is guilty of Wendy's murder.

What can they do with him though? There is no police department to call. There is no judge to pass sentence. They cannot keep him in the community because he may be a danger to the children. If he is exiled he might return, or simply go and murder somebody somewhere else. In the end, after much debate, angst and tears, the vote is taken to execute him. It is the sort of decision that would have to occur in a post-apocalyptic world like this, but that does not make it any less tortured or bleakly awful. You would think the episode could not get any worse than Greg Preston taking Barney out into a field and murdering him with a shotgun, but it does.

We know, and Tom Price (Talfryn Thomas) knows, that they have executed the wrong man.

We see Price follow Wendy into her room, after she has rebuffed his aggressive sexual advances. We watch him frantically hide a knife and a bloodsoaked rag. When the rest of the men head out to find Barney, Price rushes ahead in attempt to make Barney run away - all he manages to do is incriminate him. From there Price just has to sit in the room in utter torment while he sees Barney - the closest thing he has in the community to a friend - get incorrectly tried, convicted and executed. I have never been a fan of Tom Price, since he was established as such a lazy stereotype of the Welsh people. He has been consistently irritating and tedious to watch. Now he is also a murderer and potentially a rapist, and somehow Exton's script makes me feel very sorry for him. I am revolted by him, but somehow sympathetic at the same time. It is a supremely effective torture that the script forces onto Price. It's a tragedy of a man too terrified to admit to his crimes in order to save his friend. By the end he's simply left in a room, sobbing apologies to dead Barney's possessions. Thomas gives an exceptional performance here. He imbues Price with such a palpable sense of remorse and guilty.

Price lives. He has to. At the episode's beginning there were already concerns there were not enough people to get the farm functioning in time. Now two of them are dead and the situation is even more desperate. Killing Price might be momentarily satisfying, but Abby (Carolyn Seymour) knows they need him working the field more than they need that satisfaction. She and Greg keep the truth about Price's crime a secret. It is an awful and uncertain way to end the episode. Where on Earth can things go from here.

This is a genuinely fantastic hour of television. It is the seventh good episode out of nine thus far, but in terms of quality it towers over the rest of the series. The quality ratio rises to 78 per cent.
Posted by Grant at 5:00 PM