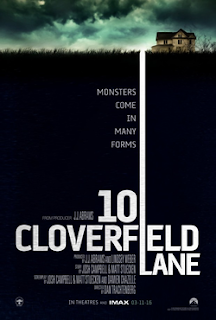 Michelle (Mary Elizabeth Winstead) packs her possessions into some boxes and leaves her apartment. As she drives into the night her boyfriend telephones her to beg her to return. Momentarily distracted, she doesn't see the pick-up truck coming. Her car rolls off the road and down a hill. When she wakes, she is chained to a bed in an underground bunker. The man who chained her there, Howard (John Goodman), explains that he found her in the wreckage and brought her underground when the world outside was subjected to an attack. Whether nuclear, chemical or even extraterrestrial, he does not know.

That is the basic premise of 10 Cloverfield Lane, a film that - like its 2008 namesake - suddenly appeared on the near horizon without most movie-goers even knowing that the film was being made. It is a claustrophobic thriller that strings it audience along on the promise of an answer to two questions: is Howard what he appears to be, and has anything actually happened to the world upstairs?

There is, of course, a third question that audiences may have, which is "What does all of this have to do with Cloverfield?" Part of me really does feel the joy is in finding out if it does or doesn't. Remember when we were young and we used to just go and see movies? The trailers didn't give away the majority of the plot, 'spoiler warnings' was not a concept anybody used, and it was much easier to go into a film and be pleasantly surprised by what goes on. To be honest I kind of want to keep it that way here. If you're desperate you can read an entire blow-by-blow synopsis on Wikipedia, so I am not going to go into any story details here.

The one thing I will say is that stylistically speaking this is a very different film. It does not employ found footage, and the camera angles are about as far away from the shaky handheld camera work of the earlier film as you could find. In fact the visuals are sometimes close to a Steven Spielberg film in their slow tracking shots and graceful movements. It also boasts a subtle and deeply effective musical score by noted television composer Bear McCreary.

The basic set-up of the film does seem like an overly familiar one, and for the most part it does follow relatively common lines. Where it positively excels is in its very strong performances. I have always appreciated Mary Elizabeth Winstead's performances, and have long felt she deserved a higher profile in Hollywood that the one she currently has. Through Michelle she creates yet another strong female protagonist for an industry finally waking up to the possibilities of such a thing.Sure a young woman at the heart of a captive thriller is hardly ground-breaking, but the down-to-earth and dogged fashion in which navigates her way through the film feels very much like an unusual kind of thing. Winstead makes the character both strong and real.

John Gallagher Jr provides much of the film's levity as Emmet, an uneducated builder who claims to have forced his way inside the bunker when the mysterious attack occurred. Gallagher plays it well, making Emmet appealing but also just a little bit suspicious: Howard seems actively difficult to believe and trust, but Emmet feels just a little too familiar to take for granted.

The film's real standout is, unsurprisingly, John Goodman. I think he is one of America's most under-valued actors. It not that his gifts for acting are not acknowledged so much as they are broadly taken for granted. He is equally at home with drama and comedy, and exceptional at both. Here he performs Howard in full-blown creepy mode. He delivers each line with such marvellous ambivalence that it is genuinely difficult to decide whether he is some horrifying murderous predator or simply an obsessive conspiracy theory who in a million-to-one shot turned out to be right.

10 Cloverfield Lane is excellently paced, breaking its action into three separate emotional phases as more information becomes apparent and Michelle discovers additional secrets. I suspect the film's climax will be divisive. I personally adored it, but it does require something of a willingness by the audience to follow the film a little further than might have been expected. While stylistically distinct from its 2008 predecessor, I do feel 10 Cloverfield Lane is a more than worthy follow-up. It does follow a familiar story, but it follows it incredibly well.
Posted by Grant at 8:00 AM