Crusade: "The Path of Sorrows" 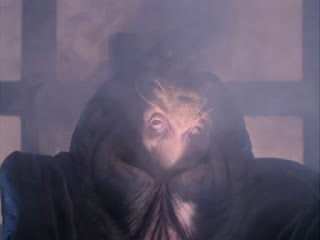 While exploring an alien tomb, the crew of the Excalibur stumble upon a strange meditating alien encased in a transparent sphere. After discovering the creature bears unique psychic powers, Gideon (Gary Cole), Matheson (Daniel Dae Kim) and Galen (Peter Woodward) each experience a flashback to a pivotal moment in each of their pasts - and a confession that each feels compelled to make.

This is actually a rather odd episode. Its unusual style and tone makes me like it quite a bit more than the previous three episodes of Crusade. I am still not convinced this is a good television series in general, but at least with episodes like "The Path of Sorrows" it is visibly trying to be.

The most striking thing about "The Path of Sorrows" is how little conflict it actually has. The Excalibur crew find an alien temple, discover the psychic alien inside a glass sphere, take it back to the ship for analysis, and then have unsettling experiences. There is no action to speak of, just thoughtful conversations and intriguing memories. It is, in effect, a canny way to dump an enormous pile of back story and story opportunities into the series all at once.

With Gideon, we see his first meeting with Galen and the destruction of his former Earth Alliance ship at the hands of an unknown spacecraft. There is a subsequent cover-up by Earth's corrupt Clark government. Later still Gideon comes into possession of the mysterious 'apocalypse box' by winning a game of cards. The man who gives him the box commits suicides mere minutes after finally freeing himself of it. These are all open threads, clearly intended to have been developed down the line had Crusade outlived its initial 13-episode order.

Galen's flashback is a little less satisfying, revealing the loss of a woman he clearly loved very deeply. While the flashback sequence itself is relatively weak, it does get a very strong pay-off by the episode's end. I have been beating up on Peter Woodward's performances in the earlier episodes; fair is fair, and I must confess he is actually rather good here. The series is over-using him terribly though: he's dominated four episodes in a row, and there are characters in the opening credits that we've barely seen. In one case - Tracy Scoggins as Elizabeth Lochley - we have not seen them at all.

The third flashback, and easily the most interesting for Babylon 5 viewers, offers a glimpse into Matheson's life during the Telepath War. The Telepath War was heavily signposted in the final two years of Babylon 5, but then was never actually presented on screen. Crusade begins with that conflict over and resolved. Getting a chance to see a part of the war, and how it changed Matheson's values considerably, is tremendously satisfying. It makes me a little regretful that Crusade did not stick around long enough to see it to fruition. This flashback was intended to feature Lyta Alexander (Patricia Tallman) from Babylon 5, but a scheduling conflict made that impossible. A pity: it would have been the icing on the cake.

"The Path of Sorrows" is a little too pretentious and self-aware to really succeed, but it is easily the best episode of Crusade so far. That makes three good-ish episodes out of four at this point, with a quality ratio of 75 per cent. That makes it sound like this show is actually pretty good; it's not. I could give an individual episode 51% and it would still rank as 'good'. This show is really mediocre.
Posted by Grant at 9:01 AM