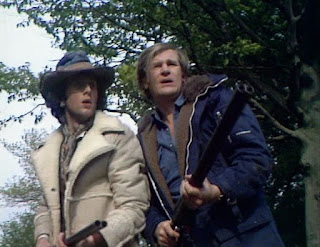 It's 25 June 1975 and time for another episode of Survivors.

Greg (Ian McCullough) and Paul (Chris Tranchell) come across a well-stocked trader named Huxley and his gang, who are trading goods and food for gold - in the hopes of getting rich once civilization is restored. At the same time Huxley's pregnant wife has escaped his clutches and seeks sanctuary at the commune. When Huxley comes to reclaim her, events spiral to a violent conflict between the two parties.

Creator Terry Nation returns to the series with this blandly superficial and generally quite tedious little potboiler. There is some potential in the basic storyline, but it is squandered by weak characterisation and dialogue and an incredibly convenient ending that doesn't just simplify this episode in isolation but also stops one of the more interesting ongoing story elements in its tracks. After the stunning quality of "Law and Order" just one episode earlier, this is a jarring step down in quality. It's a deep shame.

The biggest problem is that it all seems so simplistic, and as a result the characters simply are not believable. Why is Huxley so successful at trading when his plan to grow rich with gold is so farcical? He has bags of gold coins - who on Earth has gold coins to trade in post-apocalyptic 1970s Britain? He is obsessed with retrieving his wife, but she's clearly not actually married to him and does not want to go with him. Why risk his men's lives to get her back? What do his men have to gain by risking their lives and potentially murdering people, just to get Huxley back a woman who doesn't even like him?

A conversation in an earlier episode foreshadowed just how life-threatening and dangerous childbirth would be in this bleak new world. If "The Future Hour" is any indication, it's all rather safe and simple. Huxley's pregnant wife Laura (Caroline Burt) just has the baby without risk or incident. There was a huge potential for drama here, but Terry Nation puts it aside in favour of a bunch of men playing with guns.

The biggest problem with this approach is that 1970s BBC productions are not terribly good at presenting action, so the climactic shoot-out - which kills both Huxley and Tom Price (Talfryn Thomas) - is weakly presented and rather dull. Killing off Price is a weak and cowardly move. The previous episode set up a terrible situation, in which Price was allowed to get away with murdering Wendy (and possibly raping her too; it was never made clear) but had to live on with his own guilt and Greg and Abby's hatred of him. This situation, ripe with dramatic potential for many episodes, is cut short by bluntly killing him off at the first opportunity. Survivors was very brave in the story it chose for "Law and Order". In "The Future Hour" it is lazy and cowardly. It's a terrible disappointment.

This leaves Survivors with seven good episodes out of ten. The quality ratio slips to 70 per cent.
Posted by Grant at 7:23 AM