Doctor Who: "A Land of Fear" 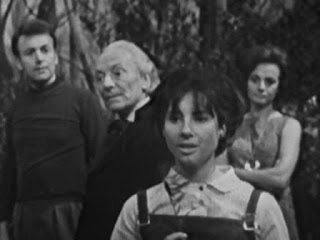 It is 8 August 1964, and time for another episode of Doctor Who.

The Doctor (William Hartnell) lands the TARDIS is what he thinks is 1963 London, to forcibly eject Ian (William Russell) and Barbara (Jacqueline Hill) from his ship. It soon becomes apparent, however, that he is a few hundred miles and a few hundred years off course - and the TARDIS crew soon become unwilling participants in the French Revolution.

Doctor Who's first production block (what we retroactively think of as series one or season one) comes to a close with Dennis Spooner's "The Reign of Terror", a six part historical serial that brings the Doctor and his companions into contact with such historical figures as Maximilien Robespierre and Napoleon Bonaparte. It is the first of four serials written by Spooner, who was a major figure in 1960s British television, and also features the first-ever location shoot Doctor Who received.

"A Land of Fear" is not the most inspiring of opening episodes. As a historical serial, it falls somewhat short of the Himalayan race for survival in "Marco Polo" or the stark, frightening confrontation with the Aztecs. In many ways it feels almost banal: the TARDIS arrives in a forest, the Doctor and his friends explore, and they get caught up in the Revolution. It all feels just a little bit too ordinary. It also seems to lack the humour of Spooner's later serials like "The Time Meddler" and "The Romans", and instead feels rather cold and detached.

The episode is not helped by its rather silly opening, with a sulking Doctor insisting Ian and Barbara get out of his TARDIS for good. It does not ring true in the slightest, and it feels a little like the actors knew it when forced to play it out. After that things settle down somewhat with the four travellers exploring a nearby abandoned house. Then the TARDIS crew stumble into a pair of runaways, pursued by soldiers, and I simply found it a little hard to care.

I think part of the problem is that it is not immediately apparent what sort of story this is. "Marco Polo" set itself up as a quest narrative from the beginning, with the Doctor journeying from Tibet to China alongside Marco. "The Aztecs" set itself up as a moral argument between Barbara's desire to stop Aztec sacrifice and the Doctor's insistence that history not be meddled with. "The Reign of Terror" simply seems to be a story about the Doctor, Ian, Barbara and Susan getting thrown into the Reign of Terror. It feels oddly weak and under-motivated.

I did not find this episode interesting enough to give it a tick of approval, but I have hope the serial will improve with future episodes. To be honest it has been many years since I last saw it - probably back in the VHS days - and I have never been a big fan of it. Time will tell if my opinion has changed. As it is, we are now 37 episodes into series one, with 25 good episodes. The quality ratio drops a little to 68 per cent.