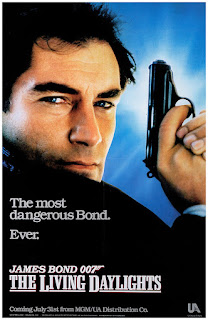 After helping a Soviet defector escape to the west, James Bond (Timothy Dalton) is dispatched to assassinate a Russian general who appears to have reintroduced a program to hunt down and kill spies from the west. Soon Bond discovers that the defector, who appeared to have re-acquired by the Soviets, is actually part of a criminal gambit to defraud both the USSR and an American arms dealer at the same time.

Released in 1987, The Living Daylights introduced movie-going audiences to Timothy Dalton's fresh take on the James Bond character. He was the fourth actor to take up the role as part of EON Productions' franchise, following in the footsteps of Sean Connery, George Lazenby and Roger Moore - who had played the role through seven films between 1973 and 1985.

Dalton only played the role of Bond twice, in this and in 1989's Licence to Kill. Following production on that second film, legal wrangles led to a six-year delay before the franchise returned with GoldenEye. Despite being offered the chance to return in that film, Dalton elected to move on. As a result he has a short tenure as Bond, but to my mind an excellent one. While not the best actor to play the role - that probably is still Sean Connery - Dalton is certainly by far the most underrated.

The Living Daylights followed a string of fairly arch and self-aware Bond films, and to accommodate the style of its new lead actor a lot of that silly self-awareness was written out of the script. There is still plenty of humour, but the character regains an edge that he rarely had since Connery left the role. That all works tremendously to both Dalton and the film's favour: this is a brisk, energetic action-adventure that rockets along at a solid pace taking in a range of international locations on its way.

In a franchise packed with maniacal super-villains, The Living Daylights also has a pleasingly modest storyline. It's fairly complicated, but much more down to Earth. An apparent Soviet defector named Koskov (Jeroen Krabbé) is playing both Great Britain and the Soviet Union against one another. While setting up his former boss (John Rhys Davies) to be assassinated by Bond, he is negotiating a triple exchange of weapons for diamonds for opium - and profiting considerably in the process. As Bond gradually works out he has been duped, he first collects Koskov's abandoned girlfriend Kara (Maryam D'Abo) and then follows a trail from Bratislava to Vienna to Tangier and finally to Afghanistan for the film's extended action climax.

Dalton is a great James Bond. He plays the role with a dry sense of humour, but balances it with a fairly steely resolve. Like Connery before him and Craig after, he successfully sells the idea that the man is a ruthless killer when he needs to be. It's an aspect of Bond that neither Moore nor Brosnan ever quite managed. It is a deep shame that EON's legal woes kicked in straight after Dalton's second film, because I feel we were robbed of at least one or two films with him in the role.

The supporting cast are generally quite strong, notably Krabbé as the effusive but untrustworthy Koskov, Davies as the blunt General Pushkin, and Joe Don Baker as the wonderfully deranged arms dealer Brad Whitaker. Most Bond films feature some form of henchman: The Living Daylights features Andreas Wisniewski as Necros, Koskov's independently hired assassin. He basically lacks a gimmick like many earlier characters of his type - unless you include his penchant for playing his walkman - but he has a wonderful physicality to him. He presents a genuine threat to Bond, particularly during the film's airborne climax as they grapple and fight while hanging out of the back of a cargo plane.

The film's action is generally excellent. The pre-credits sequence is a tense car chase around Gibraltar, which strikingly introduces Bond in action well before he gets to deliver one line of dialogue. A light-hearted car chases through the snow is perhaps the weakest part of the film, and feels a little too much like a hangover from Roger Moore's tenure. The climax, however, is a lengthy action set piece that stands among Bond's best, involving shoot-outs, runway chases, horses, an exploding bridge, and a desperate bout of hand-to-hand combat several thousand feet in the air.

Perhaps the biggest surprise of The Living Daylights is how well it has aged. At the time of writing the film is 29 years old, yet apart from its dated geopolitics it all stands up remarkably well. The James Bond movie franchise is more than 50 years old these days, so there are regularly opinion pieces and general complaint that these films have run their course, and have dated too much. The Living Daylights really does prove that wrong. James Bond works to a general formula, but it's a wonderfully fun one. Unlike the two most recent films - Skyfall and Spectre - it knows when to have fun, and how to tell a fast-paced spy story. If the current films would just stick to the basics, travel the world, and showcase excellently developed action scenes, then the franchise could happily run forever.
Posted by Grant at 4:57 PM