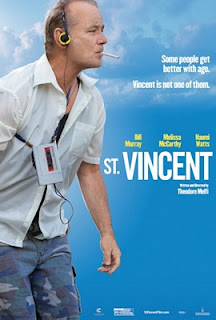 Oliver Bronstein (Jaeden Lieberher) is a bookish, under-confident 12 year-old who moves to Brooklyn with his mother Maggie (Melissa McCarthy) after she separates from his father. With Maggie working long shifts at the hospital, Oliver needs minding after school - which is where Vincent (Bill Murray) comes in: a grumpy, unpleasant gambling addict who lives next door.

You will guess many of St Vincent's story beats pretty much as soon as you start watching it; it is that kind of a film. It is as if writer/director Theodore Melfi sat down with a checklist of film clichés and just slowly started working his way through them one by one. The precocious child wise beyond his years? Check. The grumpy old loser with a heart of gold? Check. Scene where the old man takes the kid to inappropriate places for comedic effect? Check. I am reasonably certain that anyone that has seen movies before has probably seen much of St Vincent in something else.

Of course we have never seen Bill Murray do it, and it is his performance - and those of his co-stars - that manage to lift St Vincent from tedious chore to something much more enjoyable.

Bill Murray delivers an exceptional performance here. It is one of those onion-like performances, where each new plot development in the film reveals another layer of Vincent's personality and illuminates his back story. His acting in the film's final act in particular resonates very well, and shows off what a deeply talented performer he is. It would be easy to dismiss his work here - certainly most of the awards ceremonies did - because he has a particular style and cadence that appears in most of his work. Underneath that his work is consistently subtle and carefully developed. I really think he deserves more acclaim as an actor than he gets.

It is also great to see Melissa McCarthy, one of America's best comedy performers, playing a more dramatic role. She does it incredibly well, turning Maggie into an immensely warm and relatable character. By contrast Naomi Watts, best known as a dramatic actor, does a brilliant job playing Daka, a pregnant sex worker in an ongoing professional relationship with Vincent. It is a much more overtly funny role than we normally see her in, and she absolutely nails it.

These kinds of old man/young kid buddy films ride and fall on the basis of the kid. Jaeden Lieberher is great as Oliver. He is articulate, emotional and boasts some excellent comic timing. Since appearing in St Vincent he has performed in another five feature films, which is no surprise. I suspect Lieberher's career is going to run for as long as he wants to make movies. He is really very good.

Obviously with so many similar movies having been made in the past, St Vincent struggles a little to find its own niche. This is not helped by the film's fairly mawkish third act, which loses a lot of the scabrous edge than the first two acts had and tries the audience's patience just a little. For me the gold standard of this strange little sub-genre is Takeshi Kitano's Kikujiro. If you have never seen that film I would strongly recommend it over this one. That said St Vincent is hardly a waste of time. It is simply a little too much by-the-numbers to stand out from the crowd.
Posted by Grant at 9:34 AM