Doctor Who: "Guests of Madame Guillotine" 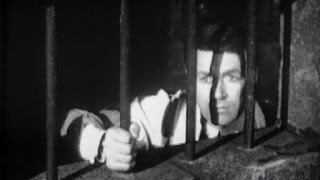 It's 15 August 1964, and time for another episode of Doctor Who. It's "Guests of Madame Guillotine", the second instalment of "The Reign of Terror".

The Doctor (William Hartnell) is rescued from a burning building, only to learn his companions have been taken by soldiers to Paris. While Susan (Carole Ann Ford) and Barbara (Jacqueline Hill) attempt to break out of their cell, Ian (William Russell) receives an urgent mission from a dying prisoner. On the Doctor's way to Paris, he is waylaid by the supervisor of a road crew - who forces him to work with the gang when he cannot produce his papers.

This second episode of "The Reign of Terror" is much more satisfying than the first. It had better pacing, three storylines helps break up the action nicely, and the warm humour that typified much of Dennis Spooner's other television writing finally makes a welcome appearance. This is a genuinely fun and entertaining half-hour of 1960s children's television.

It is great to see the series continue to focus on the Doctor. He was very much a supporting player for the bulk of this first season, but "The Sensorites" found itself wrapping its story around him and much the same thing is happening here. I cannot recall seeing him spend an entire episode separated from his companions like this, and it gives William Hartnell a great deal of comedy to play. He has a nice gift for it too, as the Doctor is first imprisoned and then outwits the road crew leader with a combination of bluffing, sleight of hand and thievery. Canny use of location shooting also enables the Doctor's journey to Paris to be broken up nicely, and gives a great sense of his day-long walk.

Over in the Conciergerie Prison, Susan and Barbara get immediately separated from Ian. There is an unexpectedly dark and adult moment pretty soon into the episode as the gaoler clearly offers Barbara better treatment in return for sexual favours. It gives the episode an unexpected edge for adult viewers, yet is delivered just subtly enough that I imagine it sailed over the heads of the children who were watching. Once in the cell there are some nice moments of camaraderie between Susan and Barbara, but it is unfortunate that while the episode retains the pro-active, independent Doctor of "The Sensorites" it has not kept the more adult, pro-active Susan. It's a shame. On the other hand it's intriguing to see Susan complain of travelling too much, and harbouring a wish to settle down. It's an unexpected moment of foreshadowing for Series 2.

Ian's scenes, in which he learns from the dying prisoner Webster that there is an English spy in Paris named James Stirling, that must be contacted. They're a clever group of scenes, because like the linking shots of the Doctor walking towards Paris they were recorded in advance on film. William Russell was, like Jacqueline Hill during "The Sensorites", on a two-week holiday, but rather than write him out as the series did Barbara, his scenes have simply been pre-made and were dropped into the recording session when required.

This is a really good episode, one that combines drama and a little comedy, darkness and a little bit of levity. The balance is spot-on, and after an underwhelming first part it sets of "The Reign of Terror" in a positive direction. We're now 38 episodes into Series 1 and 26 have been good. The quality ratio rises to 68 per cent.
Posted by Grant at 11:08 PM