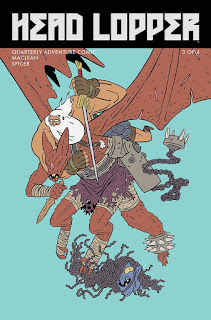 Andrew Maclean's Head Lopper continues to be a delight. It's a boldly told fantasy adventure about a grizzled, white-haired barbarian who kills monsters while arguing with the severed head of a witch he once decapitated, but now carries around with him wherever he goes. It's a quarterly book, with the third issue of four just published, but it works brilliantly for a couple of reasons.

Firstly the artwork is fantastic. It's very simple, but cleanly drawn and neatly coloured. I sense the influence of the legendary French writer/artist Lewis Trondheim here, particularly his series of graphic novels Dungeon which share the fantasy aesthetic and the faint sense of the absurd.

That sense of the absurd extends to the writing, which has a nice sense of humour about it. It is ultimately an epic fantasy with giant monsters, evil wizards and long cross-country quests, but it is all done with a nice sense of how ridiculous it all is.

The third big advantage the comic has is its format. Since it is only published once every three months it really gives the reader some bang for their buck, eschewing the standard 20-22 page format in favour of a meaty 48 pages. This gives the book room to breathe, and for the story and the action scenes to take as much time as they need. It all helps to make this a really fun and enjoyable comic book, and one well worth giving a shot. (4/5)

Under the cut: reviews of Descender, Gotham Academy and Mars Attacks.

Lemire and Nguyen's epic science fiction saga reaches the end of its second story arc in a very climactic, cliff-hanger sort of a way. This is a top quality science fiction book, with an intriguing story of robot rebellions and fractured galactic civilizations. At the centre is Tim-21 a boy robot that everybody seems to want to get their hands on. The story and dialogue are strong, but for me the most distinctive part is Dustin Nguyen's watercolour art. It feels counter-intuitive to the high technology story Lemire is telling, but strangely it works really well. (4/5)

I do really love Gotham Academy, with its boarding school setting, teenage characters and wonderful sense of gothic whimsy. That said, I really am struggling with this current "Yearbook" arc, which basically works as an excuse for a variety of writers and artists to come in and jam on the book with a series of short stories. As a one-off special or annual I probably could have embraced it, but as a multi-issue storyline it has outstayed its welcome. (2/5)

I am really not that big a fan of the Mars Attacks concept. While I did enjoy the Tim Burton film of some years ago, the aesthetic of the now-famous Topps trading card set never appealed, and I certainly never rushed to read any of the comic book spin-offs or adaptations. This new five-issue miniseries, however, comes from Chew writer John Layman and boasts art by the solid Andy Kuhn, so I figured it was worth checking out. It is really quite a distinct change from the sort of Mars Attacks silliness I've seen before: a bit more grounded, a bit more serious, and definitely a stark contrast to Tim Burton's attempt. It's a pretty engaging beginning, and an interesting take on the property. (3/5)
Posted by Grant at 7:12 AM