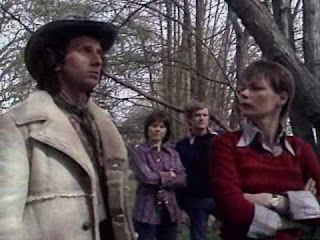 The commune begins to grow, meeting both a young man named Paul (Chris Tranchell) and a pompous former businesman named Arthur Russell (Michael Gover) - who comes accompanied by his secretary Charmain Wentworth (Eileen Helsby). When Tom (Talfryn Thomas) and Barney (John Hallett) go missing while collecting supplies, the attempt to find them leads to an unexpected reunion with a man presumed dead.

After the fairly dreadful "Starvation", Survivors bounces back with a much better episode. While not faultless, it is a step back towards the sort of darker, more cynical episodes from the series' beginning. It also does something I have been wanting the series to do from the outset - actually go back and revisit characters encountered in earlier episodes.

It was back in the second episode of the series that Greg (Ian McCullough) first encountered Vic Thatcher (Terry Scully), who had become trapped underneath a rolled tractor - crushing his legs in the process. After driving off to find painkillers, Greg returned to find Vic's girlfriend Anne leaving the quarry where he was injured. She told Greg that Vic had died. The audience saw otherwise. Now, in the eighth episode, Greg remembers the supplies that Vic had stockpiled in that quarry and goes to collect them. He finds a crippled Vic still alive, and prepared to shoot and kill anyone who approaches his hut.

Vic's fate was pretty much the bleakest of anything seen in the series' early episodes. Revisiting him here does not necessarily reverse that earlier episode's ending, but it does push it in a new direction. Vic will still have to cope with being a disabled man in an environment where being able to walk and run could be the difference between life and death. There is also the question of Anne, the vain and cowardly woman who ran out on him the moment it became clear he was not going to provide for her. If Vic can return to the series then Anne can as well, and their reunion would not be a pleasant one.

Three other travellers appear to settle down at the commune in this episode. Paul seems almost wilfully generic. He only goes by the name Paul, gives no details above his past other than that he used to live on a commune before the plague decimated Britain and that he had children who died. He is appealingly played by Chris Tranchell, but there is something a little random and unsatisfying about the character.

That said he is much more easily accepted that Arthur and Charmain. They arrive in a land rover and caravan. Arthur, as boss, is sleep in the caravan in expensive pyjamas. Charmain, as his faithful secretary, is driving him around. It is the sort of strange idea that just makes a mockery of the episode around it. In the face of civilization's collapse, what woman would continue slavishly obeying a pompous, middle-aged banker? What possible control could he have over her in such an employer-employee relationship? Neither character is particularly well thought-out, and while Gover and Helsby seem competent actors they simply have nothing with which to work.

Despite this odd couple invading the series somewhat, "Spoil of War" is a solid and entertaining episode. It's great to see what happened to Vic, and his discovery provides some strong drama. It is visible that the season's budget is beginning to wear thin - we're sticking, it seems, with the outside broadcast video cameras for the location scenes - but that does not prevent the episode from working pretty well. Eight episodes into the season, and six have been good. The quality ratio rises to 75 per cent.
Posted by Grant at 9:05 AM