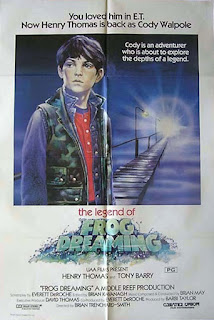 Cody (Henry Thomas) is an orphaned American teenager living with his guardian in country Australia. When he stumbles upon Donkegin Pond in the middle of the bush, and learns about its purported monstrous inhabitant, he cannot help from investigating - even if it means getting himself and his friends into trouble, or even risking his life.

Frog Dreaming is an Australian children's film directed by Brian Trenchard-Smith, who took over the production mid-shoot when its investors demanding the firing of original director Russell Hagg. It featured young American actor Henry Thomas, best known for his lead performance in E.T. the Extra-Terrestrial, in an attempt to gain some international sales. While it did achieve those sales it received something of a haphazard international release, retitled The Quest in the USA and The Go-Kids in the United Kingdom. More recently it has become something of a half-forgotten nostalgia piece for Australian thirty-somethings, and thanks to a DVD release from Umbrella Entertainment its fans finally have a chance to see it again.

Anyone who grew up watching Australian children's film and television in the 1980s will feel right at home here. There is a particular style to these kinds of productions, in which a group of children have an adventure in the Australian bush - in this case a Victorian national park - under the noses of their unsuspecting parents. The only striking difference to other productions is its comparatively high-profile American star. Cody is a slightly odd protagonist, since while he is American he seems to have an extensive knowledge of Australian life and particularly indigenous Australia. I strongly suspect the role was written as Australian and then opportunistically made American when Thomas became available. He is a strong and convincing lead. While this is far from an exceptional film, Thomas does an excellent job of reminding the viewer of what a talented juvenile lead he was.

The supporting cast vary quite wildly. Some actors, notably Australian screen stalwart Tony Barry, give highly naturalistic and appealing performances. Others, such as Dennis Miller and former Doctor Who companion Katy Manning, give those dreadful stagey performances you only seem to get from actors feeling they are 'slumming it' by performing in children's entertainment.

The film rather neatly hedges its bets as to whether the mysterious activity at Donkegin Pond is supernatural or more mundane. Much of the supernatural edge is provided by Cody's encounters with indigenous characters, who give the film a slight edge of magical realism. Actually the film's treatment of Aboriginal people is worth addressing. On the one side the film seems remarkably racist. White characters openly referring to 'abbos' as if that terminology is completely acceptable, and the film seems to think all indigenous Australians are mystical figures who commune with spirits and have magical powers. On the other side it is actually rather pleasing that indigenous culture is represented at all, and the manner in which Cody meets and converses with Aboriginal people seems commonplace and ordinary. It is such a mixed bag. Certain the racist elements feel as if they were included through ignorance rather than malice, and that does count for quite a bit.

The film comes to DVD on a fairly shaky 4:3 transfer that I suspect is actually an old VHS master. Frog Dreaming was shot in 1.85:1, and while it's a shame we cannot get the proper aspect ratio here I am honestly just happy that the film has been made available at all.

Frog Dreaming is not a great film, and I suspect its audience these days will be restricted to adults rewatching it after they saw it during childhood and viewers with a particular interest in old Australian films. It is a very solid example of its genre, however, and would likely make a solid double bill with Trenchard-Smith's other great Australian children's film BMX Bandits.
Posted by Grant at 9:36 AM