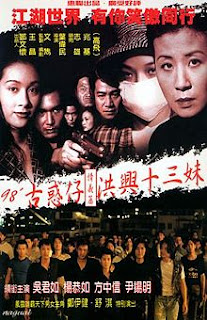 During the tense period leading up to the handover of Hong Kong from the United Kingdom to China, one of the stand-out film franchises was Andrew Lau's massively successful Young & Dangerous. Based on the popular Teddy Boy comic books by Cowman and Dickey Yau, they chronicled the careers of a group of young Hong Kong men as they progressed through the ranks of the city's triad organisations.

So popular was the series that the first three films were rushed into cinemas in the space of three months. A fourth followed one year later, and to satisfy audience demand a spin-off was released to expand on the background of one of Young & Dangerous 4's new characters - the Mongkok-based gang leader Sister Thirteen, played by Sandra Ng.

Portland Street Blues follows Tsui Sui Sui (Ng), the daughter of a low-level triad member whose youthful scams lead her into serious trouble. They eventually lead her into a leadership role within the Hung Hing triad, and a power struggle between rival gang members.

Firstly it seems unlikely that anybody unfamiliar with Young & Dangerous will get a wholly enjoyable experience, since much of the film's narrative bumps gently against characters and events from the main franchise. It even features a last-minute guest appearance by Ekin Cheng as Young & Dangerous protagonist Ho Nam. Without knowing at least a rough background it would be possible to enjoy the film's broad strokes, but one would lose out on all of the smaller intricacies. It is a film with a specific purpose: to soak up overflowing fan demand for more movies.

Technically the film is a pretty by-the-numbers affair. Director Raymond Yip does not stretch the film's tone or style very far from Andrew Lau's Young & Dangerous movies, and that makes it a comfortable extra story for the fans. It also makes the film something of a throwaway experience, since it is not necessary to see this to enjoy the core franchise and the production values and style are not distinctive enough to make it worth tracking down on its own merits.

The film is, however, a showcase for Sandra Ng, and she does an outstanding job of playing Sui Sui - later Sister Thirteen - over a period of years and a number of life-changing crises and turning points. Ng gives a performance packed with small details and quirks, all of which transform her character into someone a lot more believable and realistic than you would normally find in a Hong Kong action film. There is a striking change in her character between the film's earlier and later scenes. Ng received both the Hong Kong Film Award and the Hong Kong Critic's Society Award for this film, and that is not a surprise.

What is particularly pleasing is the matter-of-fact way in which the film addresses Sister Thirteen's bisexuality. It is never presented in a lurid or sensationalised fashion, it develops organically as part of her character, and it is never used as a source of humour or ridicule. Even when rival gangsters attempt to insult her by referencing her sexuality it seems to just wash off her.

Also very strong is Shu Qi as "Scarface", a drug-addicted young woman living along the titular Portland Street who aids Sister Thirteen during one of her bleaker moments. While Scarface's back story represents the film at its most ugly and gratuitous, her present-day personality and lifestyle is both emotionally effective and memorable.

There is a much more serious and thoughtful tone to this film compared to Young & Dangerous, but do not be too fooled. This is all pretty superficial, silly stuff. The climax in particular feels very rushed and thoughtless, once again pressing home the franchise's core message that loyalty and duty to one's criminal brothers and sisters will fix all problems and cure all ills.
Posted by Grant at 4:53 PM