Crusade: "Ruling from the Tomb" 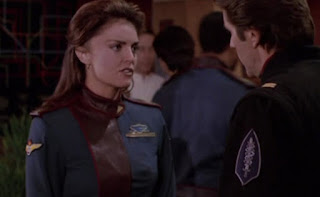 Dr Chalmers (Marjean Holden) has been invited to address a Mars-based medical conference aimed at uniting human scientists in the fight against the Drakh plague. While Gideon (Gary Cole) fights with Captain Elizabeth Lochley (Tracy Scoggins) over security arrangements, a religious cult aims to disrupt the conference - and hopefully let the human race die out instead.

After five episodes in the opening titles but in the episode, Tracy Scoggins finally makes her Crusade debut as Babylon 5 commanding officer Elizabeth Lochley. It takes a bit of a contortion in terms of storytelling for her to arrive - former B5 medical chief Stephen Franklin recommended her for the job - but she is a welcome presence. Despite being woefully underused in Babylon 5's last year, Lochley managed to be a pretty strong character and Scoggins plays her well. Her appearance here, and romantic overtures between her and Gideon, work very well.

It is also great to see the cast of the series actually behave like a proper unified group of characters. While Chalmers and Gideon are busy with the conference Dureena (Carrie Dobro), Eilerson (David Allen Brooks) and shuttle pilot Trace (Alex Mendoza) engage in some shore leave on Mars. With a combination of snappy performances and enjoyable - albeit fairly predictable - dialogue, they finally give the impression that these are three-dimensional people with private lives and opinions. It's been several episodes coming. This is the sort of episode that should have come sooner in the broadcast order than sixth - in continuity order (established by fans after the fact) it should have come fourth.

Sadly while the character work is greatly improved, the episode itself proves a little uninteresting. It focuses on what seems to be the generic standby plot of the Babylon 5 universe: a crazy plot to assassinate people. This time around it is a religious cult that believes humans should be left to die following the release of the Drakh plague. The plot centres on Alec Lebecque (John Novak), a man suffering from hallucinations that Joan of Arc is speaking with him. It's an odd quirk that is in keeping with Babylon 5, but not any aspect of Babylon 5 I ever particularly enjoyed.

I had assumed the episode was a filler by J.Michael Straczynski, given the standby terrorist narrative, but instead it is the work of noted comic book writer Peter David. This is far from his best work, despite the strong work done with the leads in conversation. It's ultimately very disappointing: the series finally gets something very right in its script, but simultaneously manages to do really ordinary and perfunctory work at the same time. In the end I found myself waiting for the episode to end, which it does in a very predictable manner.

I can't bring myself to give this episode the thumbs-up. It leaves Crusade six episodes in with a cumulative score of 50 per cent. It is such an uneven episode. It remains such an uneven series.
Posted by Grant at 10:27 PM