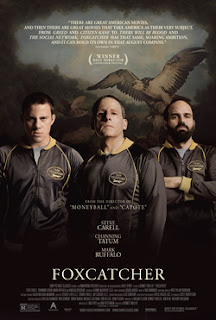 Mark Schultz (Channing Tatum) is a wrestler and an Olympic gold medallist, yet despite his achievements in the ring is struggling financially. He is also struggling under the shadow of his older brother Dave (Mark Ruffalo), also a champion wrestler but with a more secure job and a loving wife and children. When eccentric billionaire John Du Pont (a near unrecognisable Steve Carell) offers to fund Mark's training for the world championship, it seems an offer too good to be true.

That is the basic set-up of Foxcatcher, a 2014 drama directed by Bennett Miller (Moneyball) and based on a true story of what happened when the Schultz brothers came to help Du Pont establish a well-funded, competitive wrestling squad on the grounds of Du Pont's Foxcatcher estate. It is an ominous and vaguely threatening drama from the get-go, and it takes the film's entire length to reach the full consequences of that initial decision. This is a deeply impressive and atmospheric film. For those unfamiliar with the events on which the screenplay is based, it presents a gradual and measured rising tension. For those who already know what happened, that tension is replaced with an inevitable and growing dread,

Pretty much everyone who sees Foxcatcher seems to walk away raving about the outstanding performances, and that seems as good a place as any to begin. Steve Carell delivers a tour-de-force performance as John Du Pont. While he is encased in some exceptional prosthetic make-up that renders him effectively unrecognisable as Carell, this is not a make-up-as-performance character. To be honest the make-up's best effect is not to make Carell resemble the real Du Pont but to allow the audience to forget that Carell is playing the role at all. There is simply John Du Pont: strange, awkward, egotistical, The first time we meet him he seems off-putting and almost ludicrous. By the film's climax he is a genuinely frightening and inexplicable figure, both pathetic and terrifying. I am a fan of Carell's comedy work, but performances such as the one he gives here make it clear that while he's a great comic performer he is a truly outstanding dramatic actor.

While Carell's hypnotic, threatening performance dominates the film, it is really the story of Mark and Dave Schultz. Channing Tatum does an excellent job in the central role of Mark. It is a character with an immense amount of self-doubt and bottled-up resentment, and Tatum does a great job of expressing that slow-building resentment that peaks with a breakdown. I am a big fan of Tatum. He is widely disregarded by some as Hollywood's latest beefcake eye candy, but in one film after another he has demonstrated depth, range and an impeccable sense of comedy - a sense that, for obvious reasons, doesn't really come into play here. Mark Ruffalo is almost his opposite: a dramatic actor so well respected that to an extent audiences take him from granted. He is just as impressive as his co-stars, creating a character that is much more grounded and relaxed than the other two, but with a hell of a lot of depth.

The three inhabit a film that is, from the outset, a disquieting and unsettling one. It is told through long pauses and weirdly banal camera angles. Not a great deal happens that should feel threatening, and yet over a measured and slow build it does. There is something wrong about John Du Pont. It's difficult to pin down what it is as first, but as the story develops the more and more oddly unpleasant he becomes. The feeling is emphasised by Rob Simonsen and West Dylan Thordson's wonderfully eerie musical score, one than often stretches from music into soundscape. There was a lot in the way the film was presented that reminded me of David Fincher's Zodiac: that long, drawn-out sense that something awful is just around the corner.

This is a great, deeply atmospheric sports drama that slowly veers off the tracks into something else entirely. It is worth watching for Carell's performance alone, but the rest of the film remains outstanding.

(Thanks to Sonia Marcon for the suggestion of the word 'disquieting'.)
Posted by Grant at 10:21 PM