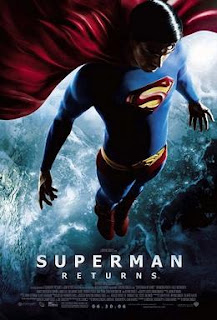 Five years after setting off to see the remains of his home planet, Superman (Brandon Routh) returns to Earth. In his absence Lex Luthor (Kevin Spacey) has been released from prison, and is plotting an all-new criminal scheme. Lois Lane (Kate Bosworth) has moved on completely, with a new fiancée and a young son. Is there a place in the world for Superman any more?

Superman Returns is a damned weird sequel. Bryan Singer, the director who had launched the X-Men franchise over at 20th Century Fox, jumped ship to Warner Bros to direct this unexpected sequel to the Salkind Superman films. Weirder still, he made a sequel to Superman and Superman II that actively ignored the events of Superman III and IV. Even weirder, he made a sequel to Superman II that either directly contradicts it or makes some very disturbing changes to the lead characters.

I have no doubt that by 2006 there was plenty of demand and opportunity for a new Superman film. I am really not sure the world needed a sequel to two 26 and 28 year-old films that featured none of the original crew, and that shares only one actor between them - Marlon Brando, who was dead.

Let's start with the things in Superman Returns that work, because to its credit there are a lot of them. Brandon Routh is an excellent Superman and Clark Kent, and manages to walk the narrow line between honouring Christopher Reeve's original performance and finding his own take on the character as well. It's a performance that is respectful without being slavish. Visually he certainly looks the part, and he plays Superman's various conflicted emotions very well.

Kevin Spacey honours Gene Hackman's Lex Luthor in his own way: just as Hackman essentially gave a distinctive performance filled with all of the tics and mannerisms one usually got from a Hackman performance, so Spacey essentially plays Luthor as the archetypal Kevin Spacey. It does not feel as if he was artistically stretched for one moment, but he is very charismatic and he is enormously entertaining and funny. Certainly among the cast he is the best thing in the film.

He is closely followed by Parker Posey as Lex's new girlfriend Kitty, against playing a very archetypal and familiar character for fans of the actress. Like Spacey and Luthor, Kitty is a role Posey could play in her sleep, so it is no surprise that she performs the role in such a funny and engaging manner. Their back-and-forth banter is pitch-perfect throughout the film.

Visually the film is a marvel. From the entire run of colour Superman films from Richard Donner through to Zack Snyder, I don't think the character has ever been more beautifully presented or showcased in as many gorgeous moments. The film strays a little too close to Christ-like imagery for comfort - an ironic problem, given that Superman's creators were Jewish and much of his origin story reflects that of Moses - but overall it is just stunning to watch. It is the third film to feature a romantic flight together between Superman and Lois, and this third attempt completely eclipses the other two.

Much of that is due to John Ottman's wonderful orchestral score, which incorporates all of John Williams' key themes from the 1978 film into a more contemporary and filled-out version. It is rich in strings and choral work, and gives the film an epic sense of grandeur and emotion.

That leads us to what is easily the greatest fault of Superman Returns. It is as much a tribute as it is a sequel, encapsulating and expressing Singer's overwhelming admiration for Richard Donner's original film. The problem with this is twofold. Firstly, it appears to be paying tribute more to the rose-tinted nostalgia for a movie than a movie itself. As I discovered upon rewatching the first two Salkind productions, they are decidedly uneven films with plenty of bad elements to balance off the good ones. Secondly, Superman Returns is simply too damned reverent to work. It positively glows with portent and grandeur. Nothing happens without slow, awe-inspiring tracking shots, orchestral swells, and angst-ridden pauses. I understand some of the motivation - to present Superman as a godlike, immensely powerful force in the world - but it is simply piled on too heavily and given too much epic weight for the film to properly function. It's a summer blockbuster that seems to delicately tiptoe around its source material for fear of breaking something. The result is an overly-long epic that moves so slowly that by the time the audience reaches its extended epilogue it has become close to a weird form of torture.

When Singer does allow the pace and energy to pick up, the film is marvellous. An early action scene sees Superman save the passengers of a crashing airliner. It's tightly edited, energetic and visually stunning. There is one point in particular when one of the plane's wings shears off as it plummets, and Superman - racing behind it - simply smashes right through the wing instead of dodging it. Well of course he would: he's Superman. The wing of an aeroplane is not an obstacle to him, so he doesn't even think about it. Of the five Superman movies I have reviewed so far, that one shot is easily the most accurate representation of the character any director has achieved.

Superman Returns also has some pretty weird problems as a result of tying up its own story choices to the events of the earlier films. Some months after Superman left Earth to look for Krypton, Lois gave birth to a son named Jason. It becomes clear during the film that Jason is Superman's son. Lois and Superman only had sex the one time of which we are aware, and that is during Superman II - at the end of which Superman erased Lois' memory of the entire experience. One can only imagine Lois' confusion some weeks later when she discovered she was pregnant and couldn't remember having sex with anybody.

It all makes Superman a slightly creepy character as well. He leaves for five years without saying goodbye. When he returns he immediately starts floating in the air a hundred feet or so from Lois' house and uses x-ray vision to observe those inside. By the film's conclusion he is sneaking into his son's room while Lois and fiancée Richard are downstairs and quietly reciting Jor-El's old monologues to his sleeping son. That is just straight-up stalkery behaviour.

Superman Returns is just a weird movie. It is one part messianic bore, one part obsessive fan film, one part entertaining summer action movie. How it goes really depends upon what kind of a film it is trying to be at any given time. It is pretty funny that Superman's son wears Aquaman pyjamas though.
Posted by Grant at 6:13 PM