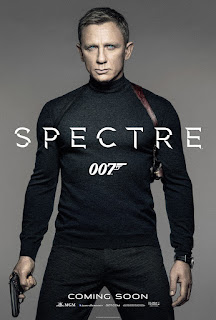 Following the death of his spymaster M (Judi Dench), James Bond (Daniel Craig) goes rogue to assassinate a man in Mexico City. In his absence, the British intelligence services are undergoing a shake-up - with the Double-O branch facing immediate retirement. When a trail of names leads Bond to a mysterious terrorist organisation, it becomes clear that the end of the Double-O program may be premature. Or something like that. To be honest an equally accurate synopsis of Spectre could be that James Bond travels to a variety of exotic international locations, has some car chases, fist fights, gun fights and foot chases, sleeps with multiple women, battles a henchman and has a climactic showdown with a ridiculous super-villain.

When James Bond was rebooted with Casino Royale it felt like something genuinely interesting was being done with the character. Better motivation. More depth. A grounded and comparatively realistic fictional world. Supremely inventive and dynamic action scenes. This quality continued for the most part in its sequel Quantum of Solace, which stumbled a little with its storyline but continued to excel in terms of character development, supporting cast and its excellent relationship between Craig's Bond and Dench's M. Then came Skyfall.

Skyfall towers over the Daniel Craig era of the James Bond films, thanks to its near-universal acclaim and enormous commercial success. I have honestly never understood either: it is overly serious, fairly nonsensical, and ridiculously long. It manages to treat itself with such pompous gravitas that it is impossible to take seriously, to - for me at least - to particularly enjoy. The Bond films have risen and fallen over the years, but the one thing that united them was a sense of humour and a sense of fun. It was thrilling escapism. Skyfall seemed to reek of a filmmaker who considered himself above the rank-and-file James Bond film, and in trying to make something better accidentally made something much, much worse. In particular Skyfall seemed to deliberately re-install all of the hoary old clichés that Casino Royale had jettisoned: the gadgets, Q Branch, Miss Moneypenny, and so on. It was as if all of the good work done by the first two films was simply erased. So was the developing story arc. Casino Royale introduced a criminal organisation. Quantum of Solace named and revealed it. Skyfall bluntly ignored it.

So where does Spectre go from there? To be honest I cannot really tell where it is going, but it is clear how it is going: messily. This is a film that retains the leaden pace and overly long running time of Skyfall, but half-heartedly tries to tie up the story arc Skyfall had abandoned, while bringing a comedic style to much of the action that has not been properly seen since Roger Moore was in the role. If there is a word to describe the film other than messy, it's bored. No one seems to be having much fun. You can see it in their slightly dull performances. Craig, who has been a sensational Bond, looks like he is running on automatic. Christophe Waltz, a superb actor roped in to play the villain, does not even seem to bother acting at all. Ralph Fiennes acquits himself marvellously as the new M, but then he's Ralph Fiennes.

There is an attempt to tie the plot of Spectre into the plots of the preceding three films, but it is tied in to the extent that Waltz effectively points to them and claims they were his responsibility. He also tells Bond he's responsible for every woman Bond knows dying, which seems as big a stretch - particularly given one of them didn't die at all. There was one thing I went into Spectre desperately craving, and that was a resolution to the story that abruptly stopped at the end of Quantum of Solace. I feel that rather than get that closure I have been bluntly mocked by the writers.

What we do get is a chase through some snow, because that's the sort of thing Bond films do. There's a high-speed car chase through Rome, but again we've seen it before. There's a melee fight between Bond and Dave Bautista (Guardians of the Galaxy) on a train that feels like it was intended to be a homage to the classic Connery-versus-Robert Shaw fight in From Russia With Love - except all it manages to do is make me wish I was watching From Russia With Love instead.

Perhaps I am being harsh. Certainly the pre-credits sequence is as thrilling as the franchise usually does, although the credits sequence itself boasts the worst Bond song of all time. Even running on automatic Craig is pretty great. Lea Seydoux makes for a reasonably good heroine but is given criminally small amounts of things to do.

Then I pause, and think again, and realise no I'm not being too harsh. Producers Barbara Broccoli and Michael G. Wilson can do better than this. They can produce a better Bond than this. Casino Royale proves that they can. What they've made here is just safe territory, something a mass audience can watch, consume and forget about. This is a franchise that, just four films after completely re-invigorating itself, is completely out of steam again. That makes me sad.

The film ends with Bond driving away in his beloved 1964 Aston Martin. It is this sort of nostalgia that drives me crazy. When Connery's Bond drove a 1964 sports car it was because it was 1964 and Bond was the sort of man who drove sports cars. Craig's Bond drives one because he's apparently the sort of spy who drives 50 year-old sports cars. His cars are as out of date as the franchise.
Posted by Grant at 11:21 PM