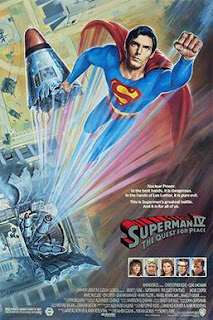 When a boy writes a letter to Superman (Christopher Reeve) pleading for him to intervene in the world's escalating nuclear arms race, Superman decides to take matters into his own hands and rid the planet of all nuclear weapons. Meanwhile Lex Luthor (Gene Hackman) escapes from prison and immediately sets about developing a new scheme to destroy Superman: cloning the Man of Steel and creating the deadly Nuclear Man to kill him.

When Supergirl failed at the box office in 1984, producers Alexander and Ilya Salkind elected to abandon the Superman movie franchise. They held onto the television rights - ultimately making Superboy in 1988 - but the film rights they on-sold to Menahem Golan and Yoram Globus, who were producing a growing number of American action films under the banner of Cannon Films. Golan and Globus successfully pitched a fourth Superman film to star Christopher Reeve, on the promise that he could have a hand in developing its story and by promising to fund any other film project that Reeve chose. With Reeve onboard they managed to sell the distribution rights to a new Superman to Warner Bros for $40 million dollars. From there it was a quick step to re-sign Gene Hackman as Lex Luthor, and appoint a new director: Sidney J. Furie.

From there it pretty much all went horribly wrong.

Golan and Globus were simultaneously staggeringly clever entrepreneurs and absolutely dreadful movie producers. The typical production process of Cannon Films involved showering the Cannes Film Market with posters for upcoming films - films without screenplays or storylines - and then producing whatever got enough pre-sales from global distributors at the conference. They were highly opportunistic, producing as many as 40 films a year. Occasionally they managed to produce a genuinely good film. More often than not they produced poorly written travesties, populated with bored movie stars collecting inflated pay cheques, and over-edited into a sort of nonsensical oblivion.

That's pretty much exactly Superman IV. The film's narrative jumps around like nobody's business. More than 40 minutes of footage was cut between Furie's director's cut and Cannon's final edit. Due to the company producing so many films simultaneously the majority of Warner Bros' distribution fee was redirected to making other pictures, leaving Superman IV with a budget of just $17 million. That is about half of what Supergirl received, with a less famous cast and a smaller-scale story. With plenty of the Superman budget going to Reeve and Hackman, it was the visual effects that lost out in particular. The scenes of Superman flying are jaw-droppingly awful, and I assume deeply embarrasing for everyone concerned. Well, everyone but the shameless producers. There's one shot in particular of Superman flying towards the camera that gets re-used about six times during the film. Elsewhere the reduced budget hits everything from costuming to location shooting: when Superman flies down and speaks to the United Nations, it is filmed not at the actual UN building in New York but at a mildly redressed bus station in Milton Keynes.

Despite all of that the film actually begins fairly promisingly. After rescuing a cosmonaut from death in a space station accident, Superman returns to Kansas where he is preparing to sell off the Kent family farm. It's a nice scene, Reeve plays it wonderfully, and it ties this new film up very nicely to the 1978 original. After that it all rushes downhill faster than an Olympic luge team.

The Daily Planet gets bought out by a Rupert Murdoch-like tycoon played by Sam Wanamaker. His over-sexed daughter (Mariel Hemingway) takes a shine to Clark Kent, leading to a string of mortifying scenes of her taking him to an aerobics class and a gym. The film hits its absolute nadir when she insists Clark join her on a double date with Lois Lane (Margot Kidder) and Superman, leading to one of those teeth-grindingly awful scenes with Clark running out of the room, changing, and flying through the window as Superman. He does this, back and forth, for about five interminable minutes.

I'm not sure of the best place in this review to mention it, but it has to be said that in this film Reeve wears the most egregiously obvious wig.

Meanwhile Gene Hackman's scenes as Luthor regularly swing into the actively bizarre. He wears a variety of outlandish costumes. At one point he disguises himself as a US Army general by putting on a cap, a bomber jacket and a pair of aviator sunglasses. In another particularly random scene we find him ballroom dancing in his lair with a woman dressed as Marie Antoinette. Sidekick Otis has been pushed out of the picture, replacing by Pretty in Pink alum Jon Cryer as his nephew Lenny Luthor. To his credit Cryer gives it his all, but it's a horrible irritating character.

The film's climax largely consists of Superman trading punches with the Nuclear Man (Mark Pillow, dubbed over by Hackman) around Metropolis - now not even hiding that it's basically New York with a funny name - and on the moon. At one point the Nuclear Man kidnaps Mariel Hemingway's character and flies her into space. To win the day Superman physically shifts the moon between the Earth and the Sun to cause the Nuclear Man to lose his powers. Sadly the film doesn't have time to showcase the catastrophic effect on the Earth's tides that such a movement would probably cause.

The original premise of the film - Superman ridding the world of nuclear weapons - is woefully short-changed, but to be honest that is arguably for the best. There is a continuing problem with superheroes of most persuasions, in that once you start considering why they don't stop all wars and cure world hunger instead of spending all their time punching super-villains, the entire superhero concept tends to collapse. It is commendable of Reeve to want to make a film about a genuine contemporary issue, but it's an issue whose presence is profoundly misplaced.

Superman IV is one of those astonishingly awful films that actually make one marvel that its producers bothered to release it at all. It was the kiss of death for the Superman franchise, which did not return to the screen for another 20 years. As for Cannon Films, within a year they were cutting even more corners than usual and staring bankruptcy in the face. For Christopher Reeve's tenure as the Man of Steel it is a sad and ignominious conclusion.