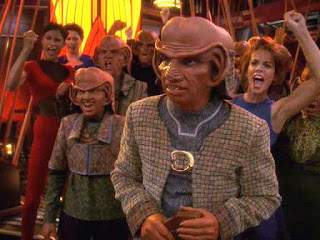 It's 19 February 1996, and time for another episode of Star Trek: Deep Space Nine.

With patronage at his bar down due to a Bajoran religious festival, Quark (Armin Shimerman) cuts the wages of his entire staff. That leads his brother Rom (Max Grodenchik) to take unprecedented action: he forms a worker's union. Meanwhile Worf (Michael Dorn) continues to struggle to feel at home on Deep Space Nine.

The standard caveat applies: this episode is a Ferengi comedy, so those who don't enjoy this particular sub-genre of Star Trek are freely excused to skip ahead or watch something else. For those of you remaining: this is a great one, since it does not simply provide some comedic fluff and nonsense. It actually pushes Rom forward as a character with a number of pleasing developments. He ends the episode as a much stronger and more interesting character - and I was already a pretty big fan of the character.

Much of the episode's comedy derives from Rom's sudden resolve to fight his brother's unjust business practices. This is unheard of for a Ferengi, of course, and so we get to see Rom and his fellow Ferengi employees angst and struggle over the idea of forming a union - something clearly forbidden by Ferengi law, culture and religious doctrine combined. Rom is quite hilariously the worst Ferengi that ever lived.

Asides from making Quark's life a living hell, Rom's actions appear to have two unexpected consequences. The first is how it sparks the beginning of a romance with Leeta (Chase Masterson), another employee of Quark's who operates the gambling wheel. There is something genuinely sweet about their interactions here. Leeta is one of those unintentional supporting characters. She was introduced briefly in "Explorers", and then shortly afterwards a scheduling issue led to "Facets" requiring an extra character - the writers simply slotted her in since Masterson was available. Now she is appearing for the third time, and is already developing and advancing as a character. She will appear several more times before the series ends, and evolves into yet another solid supporting player for Deep Space Nine.

The other consequence is that news of Rom's union travels quickly, and Quark is soon confronted by the loathsome Liquidator Brunt (Jeffrey Combs). Brunt is, like Leeta, one of those unexpected supporting players. He has already appeared once before, investigating Quark's mother's business dealings in "Family Business". Now he's back, supported by two Nausicaan thugs, ready to shut down Quark's bar and dissolve the assets of every one of his Ferengi employees. Jeffrey Combs visibly relishes the part, and makes Brunt rather fun. His solution to getting Rom to stand his union down - not getting the Nausicaans to assault Rom, but Quark instead - has its own particular kind of awful genius.

A subplot involving Worf (Michal Dorn) feeling discomfort on the station feels like one too many storylines about the character's arrival. We are now well into the season and have seen most of these beats played out more than once already. He complains about how it is not like the Enterprise. He butts heads with Odo (Rene Auberjonois) over how security is conducted on the station. He also crosses the picket line into Quark's bar, which strikes me as a little off-character. O'Brien (Colm Meaney) goes to drag him out, leading to a brawl that sees both of them - and Bashir (Alexander Siddig) - locked in a holding cell for their troubles. That scene at least is fairly amusing. The rest just makes me feel that the writers do not quite know how to make Worf fit into the series.

Despite small missteps, "Bar Association" is a pretty great episode. As I noted above, it pushes Rom forward in some really unexpected ways. He starts the episode a meek employee of his brother's. He finishes it with purpose and resolve, a potential girlfriend in the making, and a new job working for O'Brien as a station engineer. As a fan of the character that all makes me rather happy. We are now 15 episodes into Season 4, and 10 of them have been good: the quality ratio rises to 67 per cent.
Posted by Grant at 9:51 AM