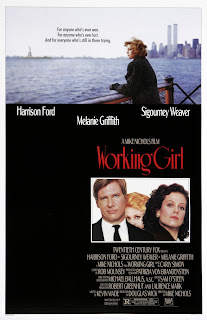 Tess McGill (Melanie Griffith) is a working-class woman from New York on a run of misfortune. Despite all her efforts she hasn’t managed to climb up the corporate ladder higher than being an executive’s secretary, she discovers her boyfriend Mick (Alec Baldwin) has been cheating on her, and after her boss Katherine Parker (Sigourney Weaver) suffers a broken leg on a skiing holiday Tess discovers that Katherine has stolen one of her ideas – a corporate buyout of a radio network - and is planning to claim it as her own. While Katherine is out of the city recuperating, Tess secretly steals her office and professional contacts, hooks up with executive Jack Trainor (Harrison Ford) and attempts to set up the lucrative deal by herself.

My immediate reactions after seeing the film were almost all about the cast. For one thing, it's clear that Harrison Ford is a very underrated actor, particularly in regards to comedy. Even in otherwise average movies like Six Days Seven Nights and Hollywood Homicide he manages to not only be funny, but make it look like it was effortless at the same time. He's great here, and performs the funniest drinking of a cocktail I think I've seen in a film.
Maybe they should have had an award for drinking in films, because then the guy might finally win one. Ford didn't get an Oscar nomination for Working Girl. Sigourney Weaver did. So did Joan Cusack. Melanie Griffith got one too. Leaving him out while acknowledging his co-stars (one of whom, Griffith, is actually rather terrible) doesn't feel like an oversight - it feels like a snub. He's been snubbed a couple of times, notably in The Fugitive which scored a Best Picture nomination and a Best Supporting Actor win for Tommy Lee Jones, and again Ford didn't even get nominated.

Yes, I know: he's obviously crying himself to sleep on top of his enormous pile of money, but it still feels wrong. It still makes me sad. He's one of America's most engaging male actors, and I don't think his own industry values him at all other than the money he earns them.

Melanie Griffith is, as I've said above, a pretty terrible actor. She's got an irritating breathy performance style, like she's trying to copy Marilyn Monroe but somehow failing quite badly in the attempt. She is admittedly well cast here, and this is the least irritating performance I've seen her give. It doesn't stretch her too much, it plays to what strengths she has, and Nichols has wisely surrounded her with strong co-stars like Ford, Cusack, Weaver and Alec Baldwin, who do a lot of the "heavy lifting" for her. I'm not surprised her career didn't go too well after this: once she tried stretching herself in things like World War II thriller (Shining Through) I think the limits of her acting became painfully obvious.

Also on the "kind of irritating" end of the movie is Carly Simon's score, which is a bit too on-the-nose and overpowering. It makes the rookie mistake of overplaying the emotional power of some scenes, adding musical accompaniment to places where the script and acting alone was doing the job.

There are of course many good things that more than compensate for the score and Griffith's acting. The script is top-notch. It was Kevin Wade's debut as screenwriter too, which makes it seem even more impressive. It's got a tight structure, careful and deliberate foreshadowing and no extraneous scenes. It also, rather delightfully, passes the "Bechdel Test": it's a rare Hollywood film where two women share a conversation and it doesn't involve talking about a man. Nichols wisely directs this script without flair or extravaganza: he lets the script do the talking, and he keeps the camera pointed at the performances. It's a movie about the characters, and doesn't have a need for visual spectacle.

This is just a straightforward, well-scripted, entertaining Hollywood comedy. It’s not going to surprise anyone with any unexpected twists and turns, it’s not going to win any awards for originality. It does what it does effectively, and directly. It’s just a fun movie, and one with a lot of rewatching value.

Random trivia time: note an early film performance here by Kevin Spacey - he was a last minute replacement when the original actor cast wasn't available. Also note the film debuts of Oliver Platt and David Duchovny - the latter of whom appears very briefly in two party scenes with Griffith and Baldwin.

The year after the movie came out NBC made a sequel in form of the half-hour sitcom Working Girl. A pre-Speed Sandra Bullock played Tess, now working as a junior executive at Trask, with Star Trek: Deep Space Nine's Nana Visitor playing her new boss. It wasn't a hit, and got cancelled after the initial order of 12 episodes.

Note: this review was originally published on Dreamwidth in May 2010.
Posted by Grant at 10:02 PM