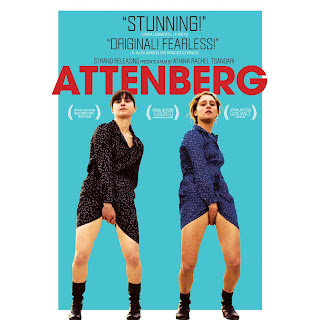 23 year-old Marina lives with her terminally ill father in a Greek factory town. She constantly approaches her best friend Bella for advice and instruction on sex and romance. She obsessively watches the nature documentaries of Sir David Attenborough. She finally encounters a stranger and tentatively begins a relationship with him.

Attenberg is a strange movie. It's rather small-scale, based on just a few characters and entirely set in the one small town. It's shot with a high degree of artificiality, as if its writer/director (Athina Rachel Tsangari) wants us to remember that we're watching a film. The script and performances are quite stylised as well. Despite those elements it remains quite an engaging experience.

One of the best elements is the film's star, Ariane Labed. She infuses Marina with an extraordinary amount of humour and warmth. Her interactions with Bella (Evangelia Randou) are fantastic.

I'm pretty sure Attenberg is the first Greek film I have ever seen, so I'm not really qualified to judge it in the context of its local industry. The director, Tsangiri, also produced the acclaimed Greek drama Dogtooth, which I plan to watch at some stage as I've heard it's an excellent albeit challenging watch.

I initially hunted down this movie because I loved the idea of somebody titling their drama after David Attenborough, who is one of the planet's greatest living treasures. To be honest his documentaries are a small aspect of the overall film, but the film as a whole is entertaining enough to honour its namesake.

Attenberg is available on DVD in the USA and the UK. I'm not sure it's available in Australia - I watched it from a UK DVD distributed by Artificial Eye.
Posted by Grant at 9:40 PM