Seven things due for a Doctor Who comeback 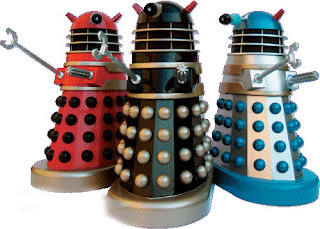 Right from the get-go, the modern-day series of Doctor Who has mined the franchise's past, starting with the Autons and continuing with the Daleks, Davros, the Cybermen, the Macra, the Master, the Sontarans, the Time Lords, Sarah-Jane Smith, K9, UNIT, the Great Intelligence and the Silurians. This isn't a surprise: if you're continuing a series with such a rich history of characters and monsters, it would be silly not to take advantage of them.

Another old foe is set to return in 2013 - I've put in underneath the cut in case you don't want to be spoiled. This got me thinking, however, about all the Doctor Who monsters and characters that haven't made it to the new series yet. Also beneath the cut are my seven most-desired elements from the old series to return.
The latest announcement is that the Ice Warriors, last seen on screen all the way back in 1974, are returning to Doctor Who in a submarine-based episode by Mark Gatiss. This pleases me immensely, as they've always been one of my favourite monsters. Who does this leave? Well they made more than 150 serials in the original series, and that leaves us with a lot of possibilities when it comes to who they might consider bringing back next. These are my picks: I can see story possibilities in all seven of these.

We've only ever seen the one Osiran, Sutekh, but there would have to be a whole pantheon of highly advanced, godlike aliens out there. They bring with them a great ancient Egyptian aesthetic, mummies and all the other trimmings. It's the concept that I like here, rather than the idea of specifically bringing Sutekh back from the dead.

The Draconians only appeared once as well, in the Jon Pertwee six-parter "Frontier in Space", but they had a great culture and wonderful make-up. I can think of plenty of space opera storylines that would benefit from a race of honourable reptiles. I suppose the only challenge would be differentiating them from the Silurians, who have co-opted their look somewhat in the current series.

The Mara, a psychic intelligence capable of possessing people and which manifests as an enormous snake, would seem to be mana from heaven to contemporary Doctor Who. For one thing, modern day visual effects could make a much more convincing giant snake. It's the tone and the richness of the worlds around it that make the Mara so effective, however. If they could nail that they've have a brilliant, creepy episode indeed.


Original appearance: "Terror of the Zygons"

Blobby, orange shape-changing foetus people - how could you possibly go wrong? Despite appearing in only one serial, they've managed to remain one of the most popular monsters in Who history. The design is unique, the shape-changing offers good storytelling possibilities - these guys are an A-class monster on a par with the Cybermen and the Daleks just waiting for their chance to prove themselves.

Like the Zygons, Sil is such a distinct character that it's a shame they haven't considered bringing him back. Played by disabled actor Nabil Shaban - who still acts today and would likely be very happy to return - he's a small, unpleasant, gleeful little slug. With the banking crises in the UK he's also remarkably topical: the ultimate yuppie banker in small, green, amphibious form.

There are so many good reasons to bring back Romana, particularly if still played by Lalla Ward. (1) She's just like the Doctor, only better at it. (2) The character is a Time Lord and can regenerate, meaning even if you don't get Lalla Ward you can still bring her back. (3) She's perfectly primed for her own spin-off, basically giving audiences a female Doctor Who. (4) There's dramatic potential - how does she feel about the death of the Time Lords? (5) There's comedy potential - great to see you Doctor, yes still on my second life as you see... what? Eleventh? Goodness me, you really need to take care of yourself. And why did you pick that forehead? For goodness sake...

The original companion: a teacher in his 30s caught travelling through time with a crotchety old man. Now, 50 years later, he meets the Doctor again - only this time the Doctor's young and he's the crotchety old man. An episode that could finally force the Doctor to face his fears of companions growing old, and dying, and leaving him forever. This is my top pick, and my dream. If William Russell isn't available they could also get Peter Purves to return as Ian's replacement, space pilot Steven Taylor. I just love the contrast of young companion, now old, meeting the Doctor, once old and now young.
Posted by Grant at 5:14 PM