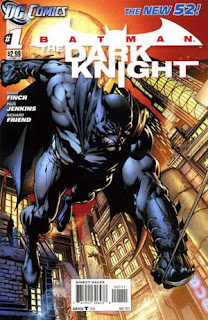 I have slowly been catching up with some of the New 52 titles that I didn't bother picking up when they were launched. Most recently, I've finally had a chance to look at Batman: The Dark Knight by artist and co-plotter David Finch. This book is basically David Finch's baby - it was launched in December 2010 to accomodate the newly signed artist, and basically exists solely so that one of DC's most popular artists can work on their most valuable property. (Marvel is doing a similar thing at the moment with Frank Cho's Savage Wolverine comic.)

Based on the first story arc, which is available in a hardcover collection, it's terrible stuff. While Finch is an accomplished artist with a keen visual style, his plotting (and Paul Jenkins' scripts) is absolutely dreadful. Like Jim Lee's terribly overrated Hush storyline some years ago, this book exists solely to let Finch draw as many of Batman's villains as possible. He even manages to use Clayface in disguise to squeeze in a Joker guest appearance, since the Joker himself was off-limits to creative teams at the time. 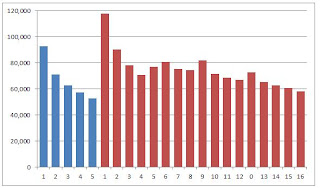 This is an utterly extraneous Batman comic, which offers nothing that fans couldn't find in Batman or Detective Comics. A look at its sales shows that it does sell pretty well, though, probably because Finch is a popular artist and Batman is a popular character. I honestly can't believe anyone is buying this book for the story.

In the above graph, the original version of The Dark Knight is listed in blue: sales plummetted pretty hard thanks to constant late shipping. By issue 5 sales had dropped from roughly 93,000 copies to only 53,000. For those without calculators handy, that's a 43% drop. With the launch of the New 52 (in red) The Dark Knight received a significant boost: including re-orders the first issue sold almost 118,000 copies, making it the seventh highest-selling title after Batman, Action Comics, Green Lantern, The Flash, Superman and Detective Comics.

By issue #4 sales dropped 40%, but then there's a surprising 14% increase over the next two months. My only reasonable guess for this increase is that the cliffhanger ending of issue #4 introduces the Scarecrow to the New 52, and readers wanted to see what he was like. There's another positive bump for issue #9, which was a "Night of the Owls" tie-in - a similar bump is visible among all the Batman-related titles that month.

Since that issue, and with the predictable exception of issue #0 in September 2012, Batman: The Dark Knight has been in a very gradual decline, dropping an average of 2,300 readers or so each month. At this rate the book has until August 2014 - at that point, unless sales stabilise, the book will be selling less than 15,000 copies and will likely be cancelled. To be honest, as a Batman title I expect it would get cancelled and replaced even faster than that.

It won't be a shame. The book simply doesn't need to exist.
Posted by Grant at 6:33 PM