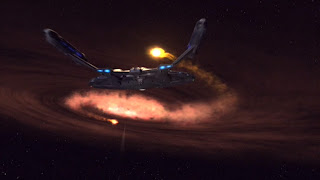 As the Enterprise makes its way to a trinary star system to observe a black hole, the crew take the additional time to work on personal projects. When each officer becomes obsessed with their own trivial tasks, T'Pol begins to suspect something is amiss - and before long the safety of the entire ship is at stake.

"Singularity" is an incredibly old-fashioned episode of Star Trek, one that wouldn't be out of place if it had featured Captain Janeway, or Picard, or even Kirk. A mysterious radiation emitted from the star system begins to affect the minds of the crew, making each of them obsessed with one specific task as the Enterprise flies ever-closer to certain destruction. Sometimes it seems that the greatest threat in the Star Trek universe is not Klingons, or Q, or the Borg: it's stellar phenomena.

The fairly predictable nature of this episode works both in its favour and against the episode in general. On the one hand there is something very reassuring about such an archetypal Star Trek adventure. It's fun to see this crew face the same sort of challenge previously faced by the crews of all the other Enterprises depicted before. The cast really get into things as well, particularly John Billingsley, who is both creepy and hilarious playing Dr Phlox getting obsessively interested in Travis Mayweather's headache.

The downside is that this is all terribly predictable stuff. It's a filler episode: they've got 26 weeks to fill with content, and not every episode can be an edge-of-your-seat gem. It also suffers from tremendously convenient Star Trek science: the radiation is slowly killing the crew, but they go from nearly dead to fine in the space of about nine minutes. I am not a scientist, but I'm pretty sure this isn't how radiation exposure works.

So this is missable comfort television, much like "The Communicator" before it. It gets a fairly limp tick of approval, but to be fair to it there's nothing in "Singularity" that's specifically awful. That comes in the next episode. Six out of nine so far this season: that's a score of 66%.
Posted by Grant at 2:38 PM