Who50: "Vincent and the Doctor" 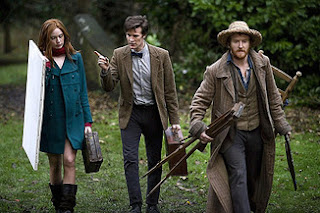 Who50 counts down to the 50th anniversary of Doctor Who by reviewing my favourite episodes and serials over the history of the programme, counting down from #50 to #1. Today, #39: "Vincent and the Doctor", a 2010 episode written by Richard Curtis and directed by Johnny Campbell.

Steven Moffat's tenure as executive producer has seen a number of unexpected writers contributing to the series, including Simon Nye (Men Behaving Badly), Neil Gaiman (The Sandman) and Neil Cross (Luther), but possibly the most unexpected writer for the Moffat era is Richard Curtis. Curtis is co-creator of classic British comedies Blackadder and Mr Bean, the writer of such films as Four Weddings and a Funeral and Notting Hill and even a noted film director with the films Love Actually and The Boat That Rocked. Curtis is without question the most prestigious and widely known script writer to ever contribute to Doctor Who, and his contribution is to my mind extraordinary.
The bulk of "Vincent and the Doctor", in which the Doctor and Amy meet artist Vincent Van Gogh, doesn't initially seem particularly exceptional. There's an invisible monster stalking a village, which the Doctor must hunt down and defeat. It's not exactly rocket science scriptwriting. Where the episode excels however is how it represents depression, and the more you examine it the more impressive "Vincent and the Doctor" becomes.

It's a blunt but wonderful act of symbolism: your depression is a monster that nobody can see but you. It doesn't make sense to others around you, and they often don't quite believe you when you explain it to them. You're not necessarily going to escape it either: one of the boldest choices the episode makes is letting Amy think she's given Van Gogh some peace and optimism only for her to discover that he ultimately committed suicide anyway. Curtis doesn't pretend that depression is something you can cure with a conversation and a hair-raising adventure.

I'm not ashamed to admit that I have struggled with quite severe depression for my entire adult life. Medical treatment certainly makes things easier, but it doesn't solve the insolvable. When I talk about my depression with other people they often don't initially believe that I can be that depressed at all, or if they do they often don't understand why I can't simply "cheer up" or find some method to stop feeling that way. The truth is, and I suspect this is true for most of us who cope with depression, depression's not that easy for me to remove or escape. It's an invisible monster that only I can see.

Let us also remember that Doctor Who is, for all intents and purposes, a children's drama - or, at the very least, a child-friendly one. The fact that it depicts depression with such realism and tenderness is an exceptional achievement.

Modern Doctor Who has seemed quite enamorous with the idea of the "celebrity historical", stories in which the Doctor meets famous people from history. For some reason the series has seemed particularly drawn toward artists: Charles Dickens, William Shakespeare, Agatha Christie. I think the Doctor's encounter with Vincent is hands-down the best celebrity historical the series has had.
Posted by Grant at 9:29 AM