The anti-gay adventures of Superman 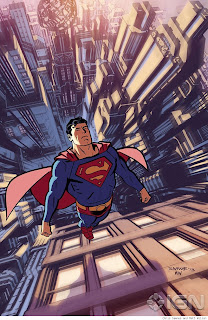 So DC Comics are going to launch a new digital comic book, The Adventures of Superman, to act very much like a companion to their successful Batman: Legends of the Dark Knight. I love DC's digital books: cheaply priced, and less concerned with continuity than they are with telling a decent story.

The announcement of the new Superman book, however, is likely to bring with it more than a little controversy, because the first writer out of the gate is Orson Scott Card.

Now Card is has an excellent pedigree of quality science fiction behind him, notably his 1985 novel Ender's Game which won both the Nebula and Hugo Award. He's also a published writer of superhero comics, having written Ultimate Iron Man for Marvel.

But here's the thing: he's also a bigot.

In 1990 he wrote that laws banning homosexual activity should remain in place, "to be used when necessary to send a clear message that those who flagrantly violate society's regulation of sexual behavior cannot be permitted to remain as acceptable, equal citizens within that society". In 2004 he wrote: "The dark secret of homosexual society—the one that dares not speak its name—is how many homosexuals first entered into that world through a disturbing seduction or rape or molestation or abuse, and how many of them yearn to get out of the homosexual community and live normally." Today he is on the board of directors of the National Organisation for Marriage, whose primary intent is to ensure that same-sex marriage does not get passed into law.

Now DC Comics is free to commission whoever they choose to write their comic books, and Orson Scott Card is free to follow whatever career he sees fit. I have no interest in people who talk boycotts, or letter-writing campaigns to try and get Card fired, or anything of the sort, just because they disagree with his opinions. He is absolutely allowed to make a living.

But I will say this: I will not buy anything written by Orson Scott Card. I will not give him money. I absolutely support his right to free speech, and to campaign for whatever he thinks is important and appropriate. I also insist on my right to not buy his product, and to explain to anyone who cares why I won't buy it. I will not be purchasing the first two issues of The Adventures of Superman, and I will not be seeing the big budget movie adaptation of Ender's Game that's coming up either. That's my right, and my response to the awful things he chooses to write and say.
Posted by Grant at 11:18 AM