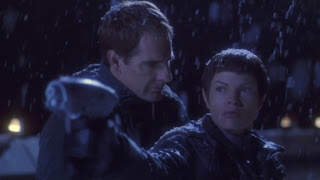 Seventeen years ago T'Pol was sent by the Vulcan High Command to apprehend six Vulcan fugitives: she caught five, but the sixth escaped. Now that he has been located, her mission is re-activated - and she's intent on bringing Captain Archer along for support. Capturing the sixth fugitive may not be as straightforward as T'Pol expected: who, for example, is the seventh?

"The Seventh" is a wonderfully taut, suspenseful character drama, in which T'Pol is forced to face events in her past and is revealed as significantly more fragile and complex a character than she first appeared back when Enterprise started. It's incredibly well performed by the entire cast, notably Jolene Blalock but also guest star Bruce Davison (X-Men), who plays the Vulcan fugitive Menos.

A remarkable amount of tension is generated over Menos and his true nature. The Vulcan High Command insists he has become a smuggler dealing in biological weapons. Menos denies that accusation entirely. T'Pol and Archer can not find any evidence of wrongdoing on Menos' part. On the one hand T'Pol has her orders, but on the other this series has proved time and time again that - in the 22nd century at least - the Vulcans are not necessarily to be trusted.

I was surprised to see that this episode was written by series creators Rick Berman and Brannon Braga, because - while both are highly capable and talented writers - this really doesn't feel like the kind of script they would usually create. There's a lot of nuance at work here, and many shades of grey to obfuscate the morality of the characters. It stops this episode from being as clearly cut as one might expect.

To my mind this is hands-down the best single episode of Enterprise's second season, and one of the best episodes I've seen so far. That brings the Season 2 tally back up to four episodes out of seven, or 57%.
Posted by Grant at 9:35 AM