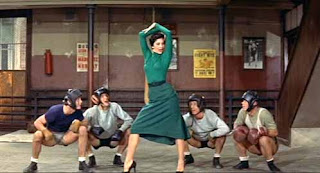 Three GIs, just returned from World War II, share one last drink together in a New York bar. They promise to meet up again at the same bar in ten years. A decade later they do reunite, but discover to their mutual horror that they don't like each other any more, and that their lives since the war have fallen far short of where they expected to be. For one of them in particular, Ted, the meeting makes him realise he's actually a bit of an asshole.

Oh, and it's a dance-filled musical.

It's Always Fair Weather is an outstanding musical feature, starring Gene Kelly and directed by Kelly and Stanley Donen, whose collaboration on Singin' in the Rain three years earlier had resulted in what is arguably the best feature film of all time. At the time of its release Fair Weather flopped: it was too dark, too cynical, just a bit too off-kilter to engage a mainstream audience at the time. Six decades later, and it's very close to topping Singin' in the Rain as my favourite film musical.

Let's count the ways. First of all, it's got a great set of songs including "Baby You Knock Me Out" and "I Like Myself". The songs were by Betty Comden and Adolph Green, who also wrote On the Town. This film was actually conceived as a sequel to On the Town, but plans ultimately changed and it became a stand-alone feature - I think this was to its benefit. The music is by Andre Previn.

Secondly it's got some of the best dancing Gene Kelly ever did. "I Like Myself", which he personally cited as the best routine of his career, is a tap dance performed on roller skates. Other routines are almost an innovative. There's a sense of play about the dance in this film, which really suits Kelly's jaunty low centre of gravity and athleticism.

The supporting cast are great, including a Will Ferrel-esque Dan Dailey, Michael Kidd (Seven Brides for Seven Brothers) and an amazingly charismatic Cyd Charisse. Her key musical number, "Baby You Knock Me Out", is great: funny, warm and utterly charming.

Finally there is the film's tone: for the bulk of the film it's surprisingly melancholic and cynical. The film is, at its core, about facing one's own failings and trying to change yourself for the better. As a result, it earns its happy ending in a fashion that's foreign to most musicals. I can see why audiences failed to appreciate this film at the time. It's really the darkest, most nuanced musical MGM ever made. The film was shot on Eastman colour film, as opposed to the more popular Technicolor used at the time. This gives the film a slightly more muted visual look compared to the eye-popping musical released around it.

It's Always Fair Weather is sadly not available on home video here in Australia, although you can purchase the DVD from the USA. It's well worth the money. It really is one of the best musicals of all time.
Posted by Grant at 9:16 AM