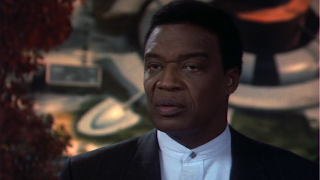 Dr Everett Jacobs, the personal physician to President Morgan Clark, escapes to Babylon 5 as a fugitive from the Earth Alliance. While the Alliance's investigator (Bernie Casey) leads the hunt, Sheridan and his crew secretly race to find the Doctor first - as he holds crucial evidence of previous President Luis Santiago's assassination.

"Hunter, Prey" is a solidly entertaining hour of Babylon 5, and pushes the series' story arc along in two directions. The central plot confirms once and for all that Santiago was indeed assassinated, and that his replacement Morgan Clark is almost certainly involved in the conspiracy. While there is nothing exceptional in this storyline, it moves along at a brisk pace and allows Garibaldi and Franklin to engage in a little action while rescuing Dr Jacobs.

Bernie Casey makes for a solid antagonist as Derek Cranston, the investigator sent by the Earth Alliance to track Dr Jacobs down. Less impressive is Richard Moll as Max, a down-below criminal who kidnaps Jacobs in return to for a promised ransom. It's partly the fault of the script, but he's a tediously cliched character and is tremendously wooden.


More interesting than the main storyline is the subplot, in which Sheridan has a long-awaited conversation with Vorlon ambassador Kosh. Kosh remains one of the most interesting elements of the series, and has been sparingly used until now: this episode marks a major change in his involvement with the rest of the cast. I adore Kosh: the character, the costume, the aesthetics of Vorlon technology, the whole works. This is a case where the slow build of a long-running storyline is paying off. I've been craving a closer focus on Kosh since the pilot, so when it finally comes it is tremendously satisfying.

So this episode is a clear winner for me. That brings Season 2 up to seven decent episodes out of 13, or a cumulative score of 54%.
Posted by Grant at 1:27 PM