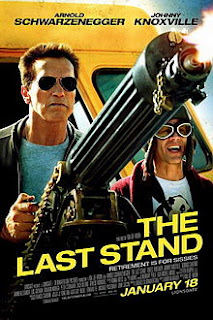 Back in the 1980s and 1990s, Arnold Schwarzenegger was the biggest name in cinema. He was one of the most iconic figures in American film, guaranteed to draw in an audience with his over-the-top muscular screen presence, thick Austrian accent and canny choice of populist action thrillers and comedies in which to star. Through The Terminator, Predator, Twins, True Lies, Kindergarten Cop and a string of other films, he firmly cemented his place as one of cinema's most recognizable - if not always most appreciated - actors.

Then he shifted into politics and - a few cameos aside - quit acting altogether. Now, to use a phrase that Schwarzenegger himself is fond of using, he's back, starring in his own action film again. He is 65 years old. He hasn't starred in his own action film in ten years; not since Terminator 3: Rise of the Machines in 2003. So how did he fare?

I suspect opinions on this are going to vary wildly, based on the taste of each individual viewer and what she or he expects to get from The Last Stand, Arnold's much-hyped return to motion pictures. This is a frantic, overly busy action movie: a shade longer than 90 minutes, and filled with a gleeful destruction of public property and a graphic, explosive body count. It is a ridiculous film full of sound and fury, broad characterization and cheesy one-liners. This is, in short, the sort of film for which the term 'dumb action flick' was coined.

A little thought reveals that there's a bit more going on here than your common-or-garden action film. For one thing the film is directed by Kim Ji-woon, an immensely talented Korean director whose previous films include several recent classics such as A Tale of Two Sisters (2003), The Good the Bad and the Weird (2008) and I Saw the Devil (2010). Kim brings with him the exaggerated melodrama for which South Korean cinema is famed. The sad bits of this film are overwrought and emphatic. The comedic bits are ridiculously silly. There's a balance, one that I've seen many times in Korean films, between edge-of-your-seat suspense and action, and deliberately banal everyday life. The goal of The Last Stand is to entertain, and Kim is intent on ensuring that it entertains via whatever means he has at his disposal, whether comedic, dramatic or purely as a theme-park ride.

It helps that Kim has cast a range of solid supporting actors, including Forest Whitaker, Peter Stormare, Harry Dean Stanton, Luis Guzman, Johnny Knoxville and Jaimie Alexander. They lift the material above the script and make the film far more enjoyable than it might otherwise have been.

At the centre of course is Schwarzenegger, and he's eased back into full-time acting very well. He's visibly old now, but to his credit he's not attempting to hide it. He's the most convincing star of geriaction (I love that genre label) since Harrison Ford returned to Indiana Jones in 2008. I'm glad to have Schwarzenegger back: he remains a unique presence in action cinema.

The bottom line with The Last Stand is that it delivers exactly what it sets out to do, and your enjoyment of the film is going depend entirely on how much you like this kind of stupid, gleefully destructive action movie. I happen to like this kind of silly nonsense an awful lot, and as a result I have a lot of fun with it.
Posted by Grant at 9:16 AM