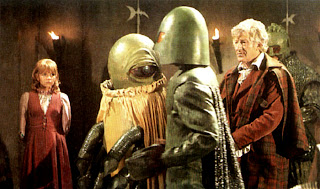 Who50 counts down to the 50th anniversary of Doctor Who by reviewing my favourite episodes and serials over the history of the programme, counting down from #50 to #1. Today, #36: "The Curse of Peladon", a four-part 1972 serial written by Brian Hayles and directed by Lenny Mayne.

The Doctor and Jo travel in the TARDIS to the planet Peladon, where delegates of the Galactic Federation have assembled to discuss the planet's admission into their government. There is evil afoot, and the spirit of the great Peladonian beast Aggedor has awakened. The Doctor, however, thinks there's a different culprit working behind the scenes.

With "The Curse of Peladon" Brian Hayles created not a simple location for an adventure but an entire world. His characters have traditions, religion, politics and personality. They have an entire culture and a history. It may not be the most original or fully developed culture, but in the context of 1970s childrens television it's pretty exceptional stuff.

There's also a wonderful imagination put to the serial's various alien delegates. There's the tiny Arcturus, and most memorably the hermaphroditic hexapod delegate from Alpha Centauri (most famous for pretty much looking like an enormous walking penis). Most impressive of all are the Ice Warriors: Hayles had used them twice before in serials starring Patrick Troughton, and their appearance immediately pointed to them being the villains of the piece. It's a master stroke that they turn out to be the good guys: it's a twist you don't see coming and one that extensively develops them as one of Doctor Who's best monsters.

Ever since childhood I've found "The Curse of Peladon" to be one of my favourite Doctor Who stories. It's cheap and cheerful, with design and costume choices that are both unfortunate and hilariously tacky. At its core, however, it's a deeply earnest story with some absolutely stunning elements. It's no surprise that the series revisited the setting and some of its characters two seasons later; it's a planet the audience was keen to see again.
Posted by Grant at 8:43 PM