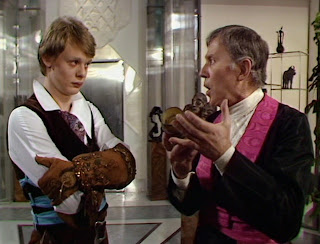 "Where the winds of restlessness blow. Where the fires of greed burn. Where hatred chills the blood. Here, in the depths of the human heart. Here is the Mara."

There are so many Doctor Who stories in which the Doctor arrives on a planet, notices a crisis, dives in to save the world and gets enthusiastically assisted by the locals. Then there are stories like "Snakedance", where the Doctor turns up out of the blue, begins raving like a madman about the end of the world, and the local population treat him accordingly. And it's not just their reaction to the Doctor that makes the Manussans so fasscinating: they're also one of the most roundly drawn civilizations in Doctor Who history.

Manussa is a planet with a past. It's not just the namechecking of two former empires that covered the planet, it's the cultural touches. Old relics and ruins. Traditional puppet theatre and acoustic bands in the village squares. Multiple religious beliefs. It's a planet with a believable culture, a visible past and three-dimensional characters. It's also a planet where people talk in some of the most beautifully crafted, lyrical dialogue to ever grace British television.

"Snakedance" is a sequel to the exceptionally good Season 19 serial "Kinda", which introduced the Mara - a snake-like psychic presence that can possess individuals and make them do its bidding. Those possessed gain a tattoo of a snake on their arm, notably the Doctor's companion Tegan who was possessed in "Kinda" and who turns out to still be under the Mara's influence here. There's actually something quite unsettling about the thought of Tegan walking through "The Visitation", "Earthshock", "Time-Flight" and "Arc of Infinity" - not to mention a lengthy hiatus living on Earth - with an alien intelligence lurking somewhere in the back of her mind.

In fact, the Mara is all in all one of the creepiest and most effective monsters Doctor Who ever had. The visual effects and puppets used to bring it to life and, to be fair, among the worst ever presented in the series. The concept, however, is outstanding. Doctor Who has a long tradition of monsters and villains that can possess or manifest within innocent people; in fact, I'd argue that the transformation of people into monsters is one of the series' defining elements. It crops up again and again: in "The Seeds of Doom", "The Hand of Fear", "Mindwarp", "New Earth", "The Keeper of Traken", even the 1996 TV movie. The Mara, here even more than in its first encounter with the Doctor, is arguably one of the best such monsters ever.

On top of all of this is some beautiful and evocative production design, and a great cast of supporting actors: notably Martin Clunes in a TV debut as the bored, aristocratic Lon but also Brian Miller as Dugdale and particularly John Carson as the archaeologist Ambril. The scene is which he is bullied into doing the Mara's bidding, via the thread of destroying precious ancient relics, is brilliant.

There was originally an intention to produce a third and final Mara serial, "May Time", but the plans fell apart and such a sequel never eventuated. Christopher Bailey, who wrote both Mara serials, retired from writing. These stories are, to my knowledge, his only television credits. He doesn't even appear to have a Wikipedia page.
Posted by Grant at 9:20 AM