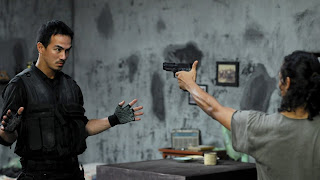 Rama, a rookie SWAT officer and expentant father, joins a 20-man team on a dawn raid on a decripit Jakarta apartment block. The entire block is controlled by Tama Riyadi, a wanted drug kingpin and crime boss, and filled with his mercenaries,dealers and other assorted criminal associates. Six stories into the building and the SWAT team is rumbled, leading to a non-stop action extravaganza as they attempt to fulfil their mission and get out alive.

Gareth Huw Evans is a Welsh film director who, after failing to find support for his film projects in the United Kingdom, found himself directing a low-budget action film in Indonesia. That film, titled Merantau, was a charming throwback to the Hong Kong martial arts action films of the early 1980s and introduced a major new face for action cinema in Indonesian Iko Uwais. The Raid (titled The Raid: Redemption in several international markets) is their second collaboration, and represents a major step forward in craft and technique.
For one thing the action is outstanding. Iko Uwais also co-coordinated these sequences, and they're both dynamic and hard-hitting. I do believe if you're going to show extreme acts of violence in a movie, then you do have a responsibility to show that it hurts. The Raid looks exceptionally painful. Characters are shot, stabbed, slashed, kicked, punched, strangled and otherwise maimed, beaten, cut up and murdered. It's also highly inventive: it would be very easy to make a two-hour action scene boring, and it's a testament to Evans' skill as a writer/director and Uwais' charisma as a screen performer that it never once gets dull.

The momentum is held by some genuinely good character work. The best action films work as well as they do because they're grounded in character. It's one of the reasons why Die Hard remains a seminal film in action cinema while most of its sequels get rightfully forgotten as soon as they've been viewed. Rama is a genuinely appealing and conflicted lead character, and the entire supporting cast around him each get their own personalities, quirks and storylines. I was particularly impressed by Ray Sahetapy's flamboyant kingpin Riyadi, as well as Donny Alamsyah as Andi, Riyadi's lieutenant who hides a personal secret from his boss.

It's often quite easy for a cult film to get over-hyped or unnecessarily praised by its followers, and in the case of The Raid I was a little apprehensive that this might be the case. While claims that it's the best action film since John Woo's Hardboiled are maybe difficult to fully stand behind, I have no problem claiming that both films are absolutely in the same league: The Raid can hold its head high among the best action films ever made.
Posted by Grant at 1:51 PM