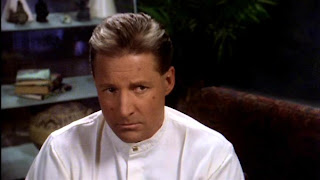 Sheridan uses a string of attacks on merchant ships as an excuse to pilot a Starfury: getting abducted by aliens in the process. While he's gone Earthforce General William Hague arrives to urgently speak with him on important business. Meanwhile Ambassador Delenn returns to the Grey Council to hear their decision on how to react to her startling transformation the previous year.

This is a strange episode of Babylon 5, because while some fairly important events happen in terms of the broader story arc the episode as a whole feels incredibly inconsequential and underwhelming. Much of the episode is based around either Delenn talking to other Minbari in a big dark room or Sheridan having fistfights in a fairly unconvincing alien prison set. There's also time taken to give Sheridan a symbolism-filled dream and get a mysterious message from Vorlon ambassador Kosh. I hate dream sequences in film and television. They feel tedious and pretentious with few exceptions. This episode is not an exception.

The other big event of arc significance is the revelation that Sheridan was appointed by Hague to command Babylon 5 specifically to vet its command crew for trustworthiness and integrity. That vetting process now done, he confides in Garibaldi, Ivanova and Franklin his secret mission: the death of President Santiago was no accident, and both he and Hague believe that the Psicorps are masterminding the Clark presidency. It's nice that they've picked this ball up again, but unfortunately in picking up one they appear to have dropped another.


For the second week in a row the Narn-Centauri War fails to score any significant mention. Sheridan doesn't even bother to mention it to the Narn that he rescues from abduction, who likely isn't aware the conflict has started again. This is getting increasingly annoying: "The Coming of Shadows" felt like a game-changer for the series, and yet here we are two episodes later and it may as well be halfway through Season 1.

This felt like a very ordinary hour of television, albeit one with some significant plot developments. I'm giving it a stamp of approval, but it's a weakly applied stamp and done in a grudging fashion. Keep your expectations low, and you will probably find this one a mediocre but passable diversion.

11 episodes into Season 2: the half-way point. Six have been good (or, at least, broadly satisfactory), giving Season 2 a rolling score of 55%.
Posted by Grant at 8:34 PM