Babylon 5: "There All the Honor Lies" 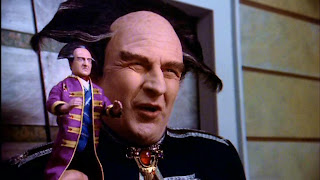 Captain Sheridan is framed for the murder of a Minbari warrior, setting him on a collision course with Ambassador Delenn and putting his career at risk. Meanwhile, a reluctant Ivanova is placed in charge of the station's new merchandise store.

'This isn't some kind of Deep Space franchise, this place is about something,' says Ivanova, in what I hope was a knowing wink and not an actual highly hypocritical dig at Star Trek: Deep Space Nine. It's becoming very clear that the manner in which Babylon 5 handles comedy - wholly comedic subplots rather than light-hearted touches or funny dialogue - is not one I particularly enjoy. For one thing this episode spends a lot of time making essentially the same joke: that merchandise is silly and vaguely tacky. It could have made it once, if it really needed to, but it doesn't need over-egging.

The main narrative, in which a clan of Minbari warriors attempt to frame Sheridan for murder, feels like it's something the series has done before. It's the latest in a string of episodes about how much the Minbari warriors chafe at the conclusion of the Earth-Minbari War. That said, it's well written and reasonably engaging. It also provides some more background to Minbari culture, which I appreciated.

The best element of the episode is Kosh beginning to educate Sheridan in... well, whatever it is Kosh is attempting to educate. It's all as ambiguous and strange, which of course suits Kosh entirely. It also picks up on plot developments in the previous episode - something that the series hasn't been doing very well thus far. (Seriously: there's a major conflict ongoing between two of the largest governments represented on the station, and you really wouldn't know it.)

All up it's a fairly enjoyable episode, so that brings the series up to eight good episodes out of 14, or a rolling season score of 57%. It's nice to see the season improving - I was really getting worried for a bit there.

NOTE: I'm reviewing enough of these SF TV episodes that using the quirky little titles like "Babble On" and "Free Enterprise" felt like it was getting in the way. As a result I'll just be using the above title format from now on.
Posted by Grant at 10:25 AM