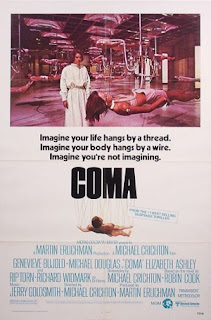 Dr Susan Wheeler (Geneviève Bujold), a surgical resident at Boston Memorial Hospital, is devastated when her best friend is pronounced brain dead after undertaking what should have been a minor surgical procedure. When she investigates further she finds a trail of surgical patients, all of whom fell into mysterious comas. All of her attempts to dig into the cause are blocked: by the hospital's Chief of Surgery (Richard Widmark) and even her own boyfriend (Michael Douglas).

Coma is a 1978 thriller based on the Robin Cook novel of the same name. The film is written and directed by Michael Crichton, who is probably better known now as an author of thick, inoffensive airport novels but who had a great career in the 1970s and 1980s as a writer and director of feature films. He directed Westworld, Runaway and The Great Train Robbery. This film, while based on a Robin Cook novel, has Crichton's fingerprints all over it. There's a fear of technology and science than runs through much of his work, and Coma is just about the most paranoid work of them all.

This is a very 1970s film, in mood and tone, and is shot and edited in a relatively 'by the numbers' fashion. The acting and script, however, have a remarkable effect: as Susan rapidly runs out of people to trust, and takes investigations into her own hands, the film becomes wonderfully rich with a nervous, panicky sort of tension. At the same time it never quite abandons a sense of realism. The story is far-fetched, but Crichton's treatment of it is not. This is particularly clear when you compare Coma to similar films, notably Michael Apted's Extreme Measures (1997) which comes across as shriekingly unbelievable by comparison.

Geneviève Bujold makes for a great, engaging lead as Susan Wheeler. She actually reminds me a lot of Dr Susan Lewis, one of the original lead characters in Crichton's medical drama ER (he was a practising doctor before turning to writing and directing). It's very much cut from the same cloth, and has the similar elements of overworked doctors, frustrating hospital administration and fiercely territorial medical consultants. Michael Douglas is surprisingly restrained as Susan's boyfriend, fellow surgical resident Dr Mark Bellows. There are also small supporting roles played by Tom Selleck and a young Ed Harris.

It would be a stretch to claim Coma is a classic film, but it's certainly an entertaining one. It was remade a few years ago as TV miniseries, but to be honest it's hard to imagine how you'd stretch the story out to three hours: it's perfectly fine at the length it is here.
Posted by Grant at 9:32 AM