In praise of Short Round, and Indiana Jones and the Temple of Doom (1984) 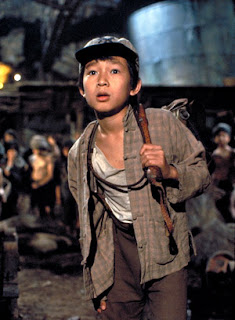 There's not a lot of love for Steven Spielberg's Indiana Jones and the Temple of Doom. Most of the complaining tends to circle around romantic co-star Willie Scott (Kate Capshaw), who is admittedly a colossal creative misfire of Jar-Jar Binksian proportions. Capshaw mutters, struts, shrieks and cries her way through a role that is entirely passive and responsive, victim-like and shrill. This isn't Capshaw's fault in the slightest: indeed she does a pitch-perfect performance of what she's required to do - it's that requirement that sucks so much. The fact that her character replaces the iconic Marion Ravenwood (Karen Allen) from Raiders of the Lost Ark only makes it worse.

Then there's the vaguely racist (sorry, did I type "vaguely"? I meant "entirely") depiction of Indians as either superstitious peasants or blood-thirsty child-beating cultists, and the utterly gratuitous and silly dinner banquet of various inedible delicacies. All up, it's very easy to understand why Temple of Doom has always been the under appreciated middle child of the three 1980s Indiana Jones films. The problem is that, while disliking the film is perfectly valid, it does ignore some absolutely knock-out elements that still make this an incredibly enjoyable movie to watch.

First of all it's easy to overlook Harrison Ford's performance, since by and large critics and mass audiences alike have dismissed his talents for almost the entire length of his career. It's easy to miss the caption at the start of this film that dates the action in 1935 - a full year before Raiders of the Lost Ark. Ford cleverly plays a slightly younger, cockier and less sympathetic version of Indiana Jones. He has no appreciation for the supernatural, and begins the film entirely out for a tidy profit and a few newspaper headlines. This film is, in part, Indy's journey from self-obsessed mercenary to a more considered hero, and Ford plays that beautifully.

It was an incredibly bold stroke to follow up the rollicking adventure of Raiders of the Lost Ark with what is essentially a horror movie. The narrative structure of Temple of Doom is completely different: while Raiders employed a serial structure of action-narrative-action-narrative, Temple of Doom instead follows a similar structure to other Spielberg thrillers like Jaws and Jurassic Park. The first hour is almost entirely set-up, while the second is a non-stop string of action set pieces and runaway chases. There are problems with this structure: little or no action in the first half of the film does mean we've got little else to watch than Willie being annoying, for example. On the other hand it's quite admirable that, despite earning a few hundred million dollars making a light-hearted adventure flick, Spielberg and producer/writer George Lucas turned on a time and made the follow-up and incredibly dark, oppressive horror movie. People get burned alive. Someone gets his still-beating heart ripped out. Indy gets possessed. For a sequel to a family-oriented action movie, this is extremely bold and unsettling stuff.

I think the best part of the movie, however, is Indy's young sidekick Short Round (Ke Huy Quan). The child sidekick is one of those dreadful cliches of film and television. There is this constant misapprehension that children want to see another child in sci-fi and adventure movies, so that they can imagine themselves participating in the action in that child's place. The problem is that kids in general don't want to be the child sidekick of Indiana Jones: they fantasise about being Jones himself. Or Han Solo. Kids want to be Batman, not Robin.

I think part of the problem is that child sidekicks have no agency in a movie's plot. They're kids: they can't save the day because that's the hero's job. They can't get into serious mortal peril or get physically hurt, because... well, because they're kids. Putting them into harm's way would surely get viewers into indignant fits about how inappropriate it all was. Clearly nobody ever told Steven Spielberg this: despite a widely held reputation for sentimentality and mawkishness, he puts young children into harm's way more enthusiastically than any other director in film history. In Empire of the Sun he throws Jim into a Japanese internment camp. In Jurassic Park he has Timmy and Lex crushed inside a jeep by a Tyrannasaurus Rex and chased by Velociraptors. Timmy in particular is tortured to a frightening extent: he also gets to fall off a cliff into a tree while inside the crushed jeep, and gets electrocuted on an electric fence so badly that Alan Grant has to do CPR to get his heart starting again.

Then there's what he does to Short Round, the young Shanghainese orphan who follows Indy around. He drives a car while getting shot at. He jumps out of a crashing aeroplane. He's almost crushed to death inside a room-sized trap. He's beaten by Thuggees. He's whipped at least twice. He cries. During the climax he even gets stabbed in the arm by a knife. On the other hand he has precisely the agency that other kid sidekicks have always lacked. He does indeed drive Indy's getaway car through a high-speed chase. When Indy is drugged and possessed by the powers of Kali it's Shorty who escapes his chains in the Thuggee mines and burns Indy with a torch to return him to his senses. During the film's climax he gets his own violent brawl with the Maharaja while Indy fights one of the Thuggees. Ke Huy Quan does a brilliant job of it all too. He's funny, fast, engaging and likeable in a way that most kid sidekicks are not. There's a hilarious moment early in the film, easy to miss, where he quietly sits impersonating Indy while the latter is talking to the village chief. It's kind of strange, in retrospect, that Indy has such a weird time adjusting to fatherhood in Indiana Jones and the Kingdom of the Crystal Skull, since he was essentially someone's father all the way back in 1935.

Basically I'll always have a place in my heart for Temple of Doom, despite its numerous faults, because Short Round isn't just a great character. He's the best kid sidekick in the history of cinema.
Posted by Grant at 11:12 AM