Who50: "Doctor Who and the Silurians" 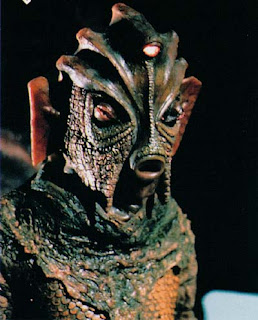 Who50 counts down to the 50th anniversary of Doctor Who by reviewing my favourite episodes and serials over the history of the programme, counting down from #50 to #1. Today, #37: "Doctor Who and the Silurians", a seven-part 1970 serial written by Malcolm Hulke and directed by Timothy Combe.

Something is leeching power from a nuclear power station. In the caves beneath the station, maintenance workers have been attacked some giant reptile. UNIT is dispatched to investigate, and the Doctor discovers there is a civilization of humanoid reptiles awakening underneath their feet - indigenous reptiles who want their planet back.

1970 brought about what is possibly the most jarring transformation in Doctor Who's long history. First of all, the series returned for a seventh season in colour and with a new actor in the title role (Jon Pertwee). Then there was the setting: the Doctor was trapped on present-day Earth (or near future Earth, depending on which episode you're watching). He is, rather strangely for an anti-authoritarian figure, now working for the military. The oddest part about Doctor Who's seventh season, however, is the tone: suddenly, and for one year only, this really isn't a childrens drama any more. There's a maturity and sophistication to the seventh season, and an uncharacteristic lack of humour. His companion for this year is Dr Elizabeth Shaw, a Cambridge-based scientist quite unlike any previous companion save for Barbara Wright - and she'd been gone for five years.

I don't think "Doctor Who and the Silurians" would have worked in any other season. There's a complexity and a maturity to this serial that would seem ridiculously out of place even 12 months later, when it would have been wedged in between the chummy friendship of Jo Grant and Mike Yates or the Doctor trading witty put-downs with the Master. In fact this serial has always felt less like Doctor Who and more like Nigel Kneale's Quatermass - if the British Rocket Group had turned up to assist, it wouldn't have felt remotely out of place.

There is also a moral dimension to the story that's often lacking from Doctor Who adventures. The Silurians (the revived reptiles of the story) are not invading extra-terrestrials: they're an intelligent species indigenous to prehistoric Earth. This is their planet as much as it is humanity's. They are not a monolithic race of identical monsters either; they're a civilization with individuals and distinct personalities. The conflict of the story comes from individual Silurians and individual humans not wanting to share the same planet. The Doctor spends much of the story trapped in the middle, trying desperately to find a way for both species to peacefully co-exist. The serial's climax is one of the best Doctor Who ever presented, so good that - in case you have never seen this story - I will not spoil it here.

The Silurians returned to the series several times, in the 1984 serial "Warriors of the Deep" and in a number of episodes of the new series. They were never as good as they were here. Few Doctor Who alien races are.
Posted by Grant at 10:32 AM