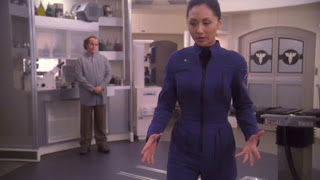 Hoshi takes her first trip through a transporter, and after returning to the Enterprise she worries that the system hasn't reformed her molecules correctly. Dr Phlox assures her she's simply being paranoid, but soon she begins to fade from view, gets ignored by her workmates and seems to be fading out of reality altogether. Once invisible and intangible, she discovers an alien plot to blow up the entire ship.

And it was all a dream.

Don't think of this as spoiling you, think of this as saving you. Now you never need to watch this episode. "Vanishing Point" is a tedious chore of an episode, less a story than it is a simple creative affront. Rick Berman and Brannon Braga, who wrote this episode, should be ashamed of themselves. The entire cast and production crew should hang their heads. Someone, someone somewhere along the chain for storyline to post-production should have pointed out the ridiculous, insulting asshattery of this episode. I assume no one did, because here it is, like a steaming turd loving transferred to DVD to offend and annoy entirely new generations of victims for years to come.

The conclusion of Hoshi's adventure - the bulk of which is lifted wholesale from the Star Trek: The Next Generation episode "The Next Phase" - is that she was simply trapped in the transporter's "pattern buffer" for eight seconds, and in that time she hallucinated everything. That's the episode's conclusion: sorry, everything we just showed you didn't happen and doesn't matter. Enterprise has knowingly wasted your time as a viewer.

The person I feel most sorry for is Linda Park, who finally gets an episode that could have provided her with some agency and solid character development, but instead is stuck in another episode of "Hoshi is kind of nervous about things". To her credit she acts her socks off throughout, but really needn't have bothered. The producers who wrote the thing clearly didn't give a shit, so I think it would be entirely fair that Park not care either.

Clearly not: if they'd cared about the quality of this series there's no way they would have written this episode, and allowed it to be produced and aired. Nil points, as the Eurovision announcers say. Ten episodes in, six good episodes: 60%.
Posted by Grant at 9:53 AM