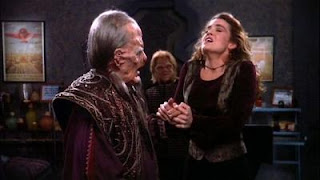 Ambassador G'Kar begs Sheridan and Delenn for assistance in the war against the Centauri, as relations between Narn and Centauri on the station break into outright hostility. Meanwhile Ivanova is tasked with escorting a representative of a new alien species around the station.

Bathos: let me explain it to you. If you don't need to have it explained to you as if you're a child in school, feel free to jump past the explanation and read the rest of the review. Otherwise, read on...

So you're all likely familiar with pathos, which is a form of rhetoric intended to produce sympathy in the mind of the reader/viewer. There's a good example in this episode, actually: G'Kar learns how little support he is going to get from the Minbari and Earth governments, stoically accepts what is offers, steps outside and - in the middle of the corridor - breaks down and cries. The scene is written and performed very effectively to elicit sympathy and pity in the minds of the viewers: we feel sorry for G'Kar.

Then there's bathos. It sounds similar, but is almost the opposite. Bathos is generated when a text slips from the very serious to the very silly, often unintentionally. In Transformers: Revenge of the Fallen, for example, the climax is an epic sequence of carnage and portentious slow motion battles right up to the point where one of the Transformers has a giant pair of metal testicles. One could also argue that Jar Jar Binks, the widely maligned sidekick of Star Wars Episode I, is a walking bathos generator: he pratfalls into a scene and immediately makes a mockery of any gravitas or portent that the scene previously held.

So here, in "Acts of Sacrifice", we jump from a crying G'Kar to Ivanova dancing ridiculously around an alien ambassador singing "boom shakalaka" in an attempt to fool him into thinking that's how humans have sex. The bathos fills the room. It's a sudden, jarring transition from the deeply tragic and heartfelt to the silly and superficial. Ivanova's scene in itself is stunningly unfunny: as painful as a Carrot Top movie. Or maybe one of the lesser Rob Schneider efforts. Actually Schneider, for all his faults, would have done a funnier job of this. It's appalling and essentially unwatchable.

According to Straczynski, this sequence was included because Clauda Christian wanted to do more comedy. It's nice that he wanted to please his actors - it'd be better if he'd thought about pleasing his audience, because Christian is not a comedic actor.

There's so much to recommend in this episode, chiefly in regards to G'Kar and Londo - both of whom are markedly different here than they were when first introduced. It's an evocative tragedy, with a horrible subplot grafted onto the side to make up the full 42 minutes and to ruin everything. I wish I could comfortably recommend it, but I can't - the Ivanova sex subplot simply makes a mockery of the entire exercise and insults the audience. 12 episodes in, six have been worth watching: a total of 50%.
Posted by Grant at 9:51 AM