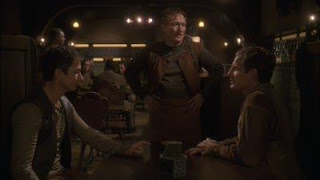 After a covert away mission to a pre-warp technology civilization, Lieutenant Reed realises that he has left his communicator behind on the planet's surface. To prevent Starfleet technology from contaminating an alien culture, he and Captain Archer return to where he left it - only to be captured by the military as enemy spies.

There's a strong sense of deja vu about this episode. The ideas that lead to Starfleet's feted Prime Directive keep coming up again and again in Enterprise, and in this case it feels like that one trip too many to the creative well. There's nothing specifically bad about "The Communicator", but it does give one a sense of "been there, done that" thoughout.

There's also a problem of the ending, which feels kind of rushed and poorly developed. There isn't really a resolution here: Archer and Reed spin a story to their captors about being genetically engineered spies (and therefore not extra-terrestrials) and are rescued by another Enterprise away team, but there's nothing that really shows the effect of their contact with the pre-warp civilization. The episode ends with a concern that their attempts to retrieve the communicator probably contaminated the culture more than if they'd just left it behind, but we get no real hint of what effect the entire incident does happen on the poor aliens down on the surface.

All of that in mind, it must be said that the performances - both regular and guest - are excellent, and the episode does rattle along at a nice pace. As I mentioned above, there's nothing here that's bad - it just all feels a little by-the-numbers and undercooked. I give it a recommendation, but a weak recommendation: that leaves Enterprise Season 2 at five good episodes out of eight, or a running score of 63%.
Posted by Grant at 4:48 PM