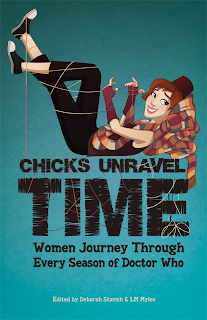 Mad Norwegian Press has, over the last few years, managed to carve itself a niche as one of the best publishers of independent TV criticism out there - particularly in regards to Doctor Who. Their six-volume About Time series by Tat Wood and Lawrence Miles is possibly my favourite series of its kind, analysing each Doctor Who serial in turn with humour and incisive critical comment. Last year the company received its biggest plaudits ever for their collection of essays titled Chicks Dig Time Lords (edited by Lynne M. Thomas and Tara O'Shea), which won a Hugo Award. A few months ago they released a hotly anticipated follow-up: Chicks Unravel Time, edited by L.M. Myles and Deborah Stanish.

This is a set of essays by women about Doctor Who. Each essay tackles a different season of the series (both old and new). They are arranged in... I don't want to say random order, because I'm sure there was thought put into it. They're not in chronological order is what's important. As a result the book dips in and out of Doctor Who history, guaranteeing that any reader not enamorous with a particular period in the show's history is never going to encounter a lengthy down patch.

The essays are remarkably varied, but are for the most part highly enjoyable to read. There has been a dearth of high-profile analysis of Doctor Who by women, and this book takes another step in redressing that imbalance. I don't want to over-emphasise this, however, because the bottom line is that you shouldn't consider reading this book because it's written by women: you should consider reading it because it's a great book about Doctor Who.

Something that immediately struck me was that, faced with the task of finding an approach to their respective seasons, almost all of the contributors focused not on the Doctor but his companions. This gives the book a fairly fresh perspective, and one that's well overdue. I found that many of the best pieces took this approach: Martha Wells writes about Donna, Emma Nichols about Jo Grant, Joan Frances Turner about Barbara and Lara J. Scott about the first Romana.

Of course this doesn't mean that chapters that didn't focus on companions weren't any good. I particularly liked Tansy Rayner Roberts' piece of Season 23, which I've always felt was unfairly maligned by fans in general, while Rachel Swirsky takes a look at River Song and the show's use of Adolf Hitler in Season 6.

I think the most interesting piece is probably the chapter by Caroline Symcox, who's written for Big Finish in the past but whose day job is being an Anglican priest. Her examination of Season 11 (Jon Pertwee's last year) and its treatment of Buddhism and spirituality is worth purchasing this book all on its own.

So it's another winner by Mad Norwegian. They're turning this range of books into a bit of a cottage industry, with Queers Dig Time Lords forthcoming and Whedonistas and Chicks Dig Comics already in stores. I really hope the range continues to expand (hint: Chicks Dig the Final Frontier), because it's adding a valuable and necessary voice to the analysis of cult television and pop culture. Long may it succeed.
Posted by Grant at 9:12 AM