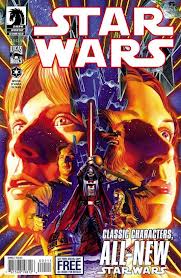 Tie-in comics are a funny thing to me. If there's a successful film or television series, it has a reasonable chance of being adapted in comic book form. Buffy the Vampire Slayer, Star Wars, Star Trek and a whole plethora of old toy franchises have all made the transition. Some have been great. Some... not so much. It does create a lot of problems with how the property is translated though.

Comics are not films, and they're not TV shows, and often an attempt to adapt a text from one medium to another will result in a book that pleases nobody. Exploit the potential of the comic book and you might drag the story too far away from the property it's based on. Leave it too slavishly imitative of the original and you start to question why it's been turned into a comic. Trying to please two audiences at the same time must drive the creative teams made, and it's no wonder so many tie-in books are so utterly disappointing.

If you want to read an exceptional tie-in comic, Brian Wood's Star Wars #1 came out a few weeks back and was absolutely fantastic. It skirts the line wonderfully, feeling very faithful to the 1977 film yet adding its own elements at the same time. Princess Leia as an X-Wing fighter pilot? I'm sold.

This week, pretty much on a whim, I purchased two other tie-in comics: IDW's Doctor Who: Prisoners of Time and DC Comics' Masters of the Universe: The Origin of He-Man. Also under the cut: reviews of All-New X-Men, All-Star Western, Aquaman, Batman and Robin, Batman Incorporated, The Flash, Hawkeye, Journey into Mystery and X-Men Legacy.

It took me a few weeks, but I've finally managed to track down a copy of All-New X-Men #6. In this issue, time-travelling Jean Grey gets to know present-day Kitty Pryde and starts to learn how to cope with her new powers. Meanwhile young Cyclops goes AWOL from Westchester, leading Wolverine to try hunting him down and bringing him back. My original guess when this comic was announced was that the time-travelling young X-Men storyline would be a fairly short introductory one, but it now seems clear they're going to be stuck in the future for quite a while. This issue has great characterisation and a nice balance of conversational scenes and action. It's very satisfying to know that, even as a teenager, Scott Summers is a bit of a dick who likes to shoot Logan with his eye lasers. You can take the boy out of time, but some things will never change. (4/5)

There's something refreshing about reading a DC Universe comic where one issue a character shatters his leg, and in the next it's months later and he's still confined to a wheelchair with a slowly healing leg. This is a tight, engaging finale to the "Black Diamond" arc, with a disabled Jonah Hex still holding his own against a vengeful Mr Hyde. The backup, which concludes the "Tomahawk" strip, is wonderfully old fashioned and satisfying. In an unrelated note, while I'm all for the corporate synergy those Arrow promos on the tops of all the comics at the moment look really ugly. (3/5)

"Throne of Atlantis" has been an excellent large-scale superhero adventure, and that sense of big-budget action continues in this fourth and penultimate instalment. The first Aquaman arc, "The Trench", is dragged into the plot here, and the whole issue ends on a wonderful game-changing cliffhanger. I still think this storyline would have been better served if it had stuck to being published in Aquaman alone (I hate cross-title storylines with a passion), but with an overall quality this high I can't begrudge DC too much for making me buy three issues of Justice League. I think one of the reasons I've enjoyed this storyline so much is that, pretty much for the first time since the relaunch, Johns has simply told a gripping Aquaman story and not spent as much time telling his audience how awesome Aquaman is. We buy the comic already, Geoff: we know he's awesome. (4/5)

This, while a little pricey at $4.99, is a wonderful self-contained story of Damian attempting to discover more about his grandparents, and Bruce going off on a wild goose chase at his son's behest. It's a genuinely funny one-shot, with some great comedy moments and wonderful bits of character. Tomasi has got a wonderful handle on Damian, and gives him almost all of the best lines. Links to other storylines, particularly Grant Morrison's Batman #666, are subtle but enjoyable to those who can recognise them. (5/5)

I am astounded at how Grant Morrison is managing to make each successive issue of Batman Incorporated feel more climactic than the last. This issue has a notable character death, plot twists galore and yet another set-up for the future. Two things in particular occured while reading this issue. The first is simple amazement at how Morrison, when firing on all cylinders, is a master of long-term planning. We're hitting the the home run at this stage and all of the elements introduced, starting all the way back in Batman #655 in September 2006, are slotting into place and forming what is looking like a jaw-dropping finale. The second is how, once you strip away all of the other elements such as Bruce Wayne establishing Batman Inc or Talia al Ghul's secret invasion of Gotham City, this whole seven-year arc is effectively about Damian Wayne finding his place as Robin and as the son of Batman. He is hands-down the best DC/Marvel character of the decade. Tt. (5/5)

Doctor Who: Prisoners of Time #1

For Doctor Who's 50th anniversary, IDW is publishing a 12-issue maxiseries, Prisoners of Time. Each issue stars a different incarnation of the Doctor, with a 12th issue at the end to wrap up the over-arching storyline. So as this is issue #1, we're following the adventures of the First Doctor (as portrayed on-screen by William Hartnell) and his companions Ian, Barbara and Vicki. It's strange: the cover features Hartnell-era Cybermen, which weirded me out (he only encounters them a few hours before he dies), but the interior features a completely different returning monster. It was an unexpected sequel, and to be honest not a very good one. I have to admit I'm about as hardcore a Who fan as they come, so I may be being unnecessarily harsh, but it's simply not a very good comic. The art is expressive and enjoyable, but the script is filled with a horrid combination of a redundant and poorly conceived sequel, paint-by-numbers characterisation, and continuity errors. The First Doctor deliberately controlling his TARDIS? Really? I adore the idea of IDW publishing comic miniseries with past Doctors, but they're going to need to really improve the quality if they want my continued business. (2/5)

The New 52's most reliable comic: issue in, issue out, it blends inventive panel layouts with wonderfully expressive art and enjoyable superheroic adventure. It always feels a little like a cousin to Williams and Blackman's Batwoman, and this issue feels like that in particular: lots of two page splashes, interesting and unusual panel layouts and an apocalyptic sort of climax. While Batwoman is very tightly and vividly drawn, The Flash has a wonderfully loose, almost pastel-coloured aesthetic. Every issue is like a small surprise, reminding me that this book is so consistently outstanding. (4/5)

This is a comparatively last-minute drop-in issue, pushed into the schedule because Matt Fraction wanted to address last year's Hurricane Sandy and the massive amount of damage it caused to New York and New Jersey. When I heard that Fraction was planning to do this, I was a little concerned: attempts to address real-world tragedies and events in superhero comics often does little more than highlight how ridiculous superheroes are. With Hawkeye, however, he more than gets away with it: both Clint and Kate are ordinary people, and he cleverly splits them up to tell two simultaneous stories in Brooklyn and Jersey. Significantly they're small-scale stories about people on the street, and what's more it's people on the street who save the day. Guest artists Steve Leiber and Jesse Hamm each take a plot thread, and each adapt marvellously to Fraction's dense, dialogue-rich panel layout. This book continues to impress me: seven issues in and I've given every single one five out of five. It's simply that good. (5/5)

Sif's adventure as a beserker continues. This is a really solid adventure comic, and while Thor: God of Thunder goes about telling a complex multi-generational tale of Thor fighting a god killer in three different time periods, Journey into Mystery tells a nice, easy-to-read adventure of Norse mythology and monster-slaying. Valerio Schiti's artwork really works in this book's favour: Kathryn Immonen is writing an action-packed fantasy comic, and Schiti is providing appropriate visuals in spades. I particularly like how the book's current protagonist Sif is depicted as powerful, muscular and dynamic without also looking kind of slutty. Current DC artists (Cliff Chiang excepted) could learn a lot from this book when tackling Wonder Woman. (3/5)

Masters of the Universe: The Origin of He-Man #1

DC has been going crazy with their Masters of the Universe comics. First an online comic, then a miniseries, now some one-shots and soon an entire monthly ongoing series. I was a Masters of the Universe child, born at exactly the right time to be the target market for the cartoon, the action figures, even that Dolph Lundgren live-action film that few people seem to realise was a stealthy adaptation of Jack Kirby's New Gods. This book, at US$2.99, was very much an impulse purchase in the store. The first thing to notice is that it has beautiful, painterly artwork: I'm not sure He-Man and Skeletor have ever looked this good. The second thing to notice, unfortunately, is the massively decompressed storytelling style. Very little happens in this comic. It looks amazing when it does, but there are too few panels per page to make this a particularly worthwhile purchase - not when there are books like Hawkeye and Prophet taking much longer to read for nearly the same cost. (2/5)

I am digging the hell out of this comic. Last issue closed with the X-Men taking two young mutant orphans out of David Haller's hands and taking them back to Westchester. This issue opens with Haller realising something is deeply wrong with one of the children, and doing his best to infiltrate the Jean Grey School to save the day without being caught by Wolverine, Storm and the gang. A great flashback fills out the middle of this issue, and a brilliant cliffhanger twists the entire first story arc into perspective. (5/5)

Winner of the Week: Batman Incorporated, although Hawkeye gets pretty damned close.
Loser of the Week: Doctor Who. Masters of the Universe was similarly disappointing, but to be honest I went in expecting less.
Posted by Grant at 10:25 PM