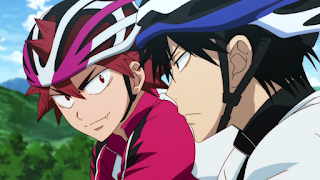 The first years' welcoming race begins: a 60 kilometre trail through the city, across flat roads, up a mountain, and around a dam. Onoda is excited to finally share a competitive race with Imaizumi and Naruko, but his excitement soon turns to despair when his 'mommy bike' simply cannot keep up with the other riders' racing bikes.

There is an immediate and overriding question that hangs over this episode: why did the cycling club allow Onoda to race with his mommy boke in the first place. It is clearly under-specced compared to the other riders, guaranteeing failure from the get-go. So why go on with the race? It may make for momentary drama on-screen, but it feels like a baffling move to generate suspense at the expense of actual story logic.

Of course the seniors do deliver a spare racing bike for Onoda by the episode's end, giving him a fighting chance at winning, but why deliver 20 minutes into the race? Why not simply delay the race half an hour and deliver it to him from the beginning? Why not simply put it off to the next day, or the following week? In short, this episode doesn't make a lot of sense, and feels cheap as a result.

The racing scenes are, in the episode's defence, well laid out and highly dynamic. The race immediately splits into two groups: Imaizumi and Naruko fighting one another for the lead, and the remaining first year cyclists behind them in a pack. There still is not much to distinguish Onoda's fellow riders, making them feel increasingly disposable as the story goes on.

There is also a bit more of an explanation, with visuals, about how gears work on bicycles and how experienced riders use them to best advantage. These little information sessions, sneaked into the episodes in a pretty effective fashion, are rapidly becoming my favourite part of the series. I have noted this in an earlier review, but it reminds me an awful lot of the fishing tips in Tsuritama. It's nice detail that helps inform the viewer and should make for efficient presentation of complex cycling techniques as the series goes on. Explain it now, and it can seem self-apparent down the track.

That said, I still cannot get past the fake loops the episode jumps through to generate drama this time around. Like the previous episode, it just doesn't hit a high enough level of quality for me to recommend. Of course as a serialised anime it is relatively necessary (at least so far) to watch all of the episodes anyway, but know that this is not one of the more entertaining episodes to watch. Overall Yowamushi Pedal's quality ratio slips to 67 per cent, or four out of six.
Posted by Grant at 7:49 PM