Izetta: The Last Witch: "Beginning of the War" 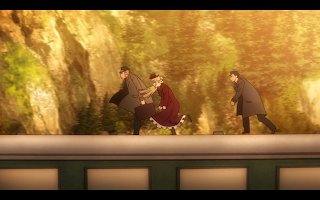 It is 1 October 2016, and time for the first episode of Izetta: The Last Witch.

In an alternative Earth, a Second World War is looming as the Empire of Germania begins to invade its immediate neighbours. With the island of Britannia refusing to participate and defend its regional allies, Princess Fine of Eylstadt goes on the run from the Germanian forces with the assistance of a flying witch named Izetta.

So this new 12-episode anime is not exactly subtle with its fictional universe, but you can immediately see a method to its madness. Making late 1930s Germany a slightly transformed nation means that Izetta: The Last Witch can essentially do 'magical witch versus nazis' without the inconvenience and controversy of putting actual nazis into its narrative. There is not a Fuhrer but an Emperor. No one salutes with a 'seig heil', but they do a slightly different salute with a 'seig reich'. It's so close as to make no odds, but just far enough away to give the series a nice bit of freedom with what happens as the story goes on.

This is a beautifully designed series, with a slightly more realistic set of character designs that I find rather reminiscent of Witchhunter Robin a few years back. It also focuses on two strong female protagonists, although in this first episode we really only get time to spend with Princess Fine. There is a slight steampunk influence on much of the Germanian technology, which suits the slightly heightened fantasy world that the characters all inhabit. There is also a slight influence of the series from the films of Studio Ghibli: a little bit of design here, a little bit of Hisaishi-inspired piano score there. The backgrounds in particular are beautiful.

The episode has marvellous sense of pace as well, shifting from a foot chase through and on top of a train to a tense negotiation at the opera, and finally to an action sequence on a Germanian military plane. The animation is solid with a lot of film techniques in the way it has been put together: watch how an opera performance segues into scenes of a border fortress getting decimated by a Germanian bombing run, for example.

If there is a key drawback it is the predictable one: too much fan service. Immediately after her escape from the passenger train Fine takes a shower: as far as I can make out it is specifically so that the viewer can see her naked. A climactic sequence showcases a lot more of Izetta's body than would ever be necessary. It's a shame in that case, because it dents an otherwise stunning climax. To an extent one has to shut up and do their best to ignore fan service in anime, but it really does get tiresome - and if the rest of the episode is as good as the one we have here, it feels doubly irritating and out of place.

Fan service aside this is a great opening episode, and it looks to be a potentially great series. The period setting works, as does the combination of war and magic. The characters are likeable and the plot rockets along wonderfully. I am very keen to see where it all goes.
Posted by Grant at 9:06 AM