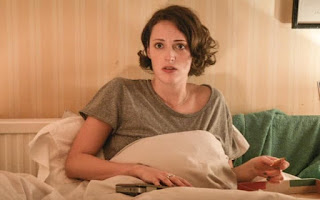 Fleabag, written by and starring Phoebe Waller-Bridge, is the best television series of 2016. It is nominally a six-episode half-hour comedy produced in partnership between the BBC and Amazon Studios. While it is savagely funny throughout, selling Fleabag purely as some kind of new sitcom severely under-sells its achievements. It is also a superb and deeply effective drama, capable of some of the most gut-wrenching moments of upset in between its harsh, cutting laughs. It is a complete cliche to claim 'you'll laugh, you'll cry', but in the later episodes in particularly I have to admit to both laughing out loud and tearing up within the same 25 minute episode.

Waller-Bridge plays the protagonist, an unnamed woman living in London and single-handedly running a failing guinea pig-themed cafe. She is constantly breaking up with her boyfriend Harry (Hugh Skinner) to indulge in one-night stands. She regularly squabbles with her tightly wound sister Clare (Sian Clifford). Her mother has died, and her father (Bill Paterson) has married a close family friend: a supremely passive-aggressive artist (Olivia Colman) with whom the protagonist (which publicity materials have nicknamed "Fleabag") has a deeply antagonistic relationship. From the first episode there is an enormous awful mystery hanging over the story. We know that something dreadful has happened, but the full story - and its full implications - trickles out over the course of the season.

The series is packed with direct address from Waller-Bridge right down the barrel of the camera lens, turning the viewer into a sort of co-conspirator-come-confessional. Sometimes it is a whole monologue, and other times it's simply a pithy aside - or even just a look. The series was originally developed and performed a solo live performance, and this direct address technique helps maintain that level of intimacy in the television medium.

Fleabag also has a very frank attitude towards sex, with multiple sex scene throughout the season. It feels a bit provocative, but in all honesty it feels a little more like truth: it is still comparatively rare for film and television drama to approach sex scenes from a female perspective. The material definitely enhances the series more than detracts from it.

Phoebe Waller-Bridge gives a sensational performance, engaging regularly in poor behaviour but somehow dragging the audience willingly along with her. Sian Clifford is an excellent comic foil, with her well-behaved and uptight demeanour providing a lovely counterpart when the sisters are together. Bill Paterson gives what is probably the most subtle performance of the series, portraying an awful lot of pain, regret, embarrassment and love through a thin, awkward veneer of jokey civility. I have always rather enjoyed Paterson's performances on screen; I think this is one of the very best.

Perhaps the series' best coup, however, is Olivia Colman. She is seemingly the reigning queen of British television at the moment, via award-winning and acclaimed performances in Broadchurch, Peep Show, Rev, 2012 and The Night Manager. She seems so ubiquitous across British television drama that I am half-expecting her to replace Peter Capaldi in Doctor Who next year. She seems so pleasant in interviews and on chat shows that I would claim she was the 21st century Joanna Lumley if Lumley wasn't still occupying the role. It is so great, then, to see Colman play a character so genuinely easy to despise: passive-aggressive, controlling, insincere, manipulative and cruel. Fleabag's stepmother is such an immediately recognisable personality type that one immediately wants to see her punched in the face.

The series juggles a lot of balls as it goes, not only telling a family story but also making easy comedic gags alongside character comedy and occasional moments of social satire. In one episode where the two sisters go to a women's retreat in the country. It consists of 20 women living for a weekend in absolute silence while undertaking menial cleaning work around a mansion - ostensibly to meditate via simple labour. Fleabag sneaks across the park to the equivalent men's retreat: it is a group of middle-aged men standing around an enormous fire screaming 'slut!' at a blow-up doll. It's a sharp, ugly bit of satire - but Waller-Bridge immediately follows it up with one of the most gentle and philosophical scenes I've ever seen in a comedy. The writing is beautiful and blunt in turns. Hugh Dennis (The Now Show, Outnumbered) delivers possibly the single-best performance of his career.

This is a stunning work of television: so original and arresting that it transcends its comedy genre and becomes something much more special and complex. In the whole of 2016 I did not see a television series that was better.
Posted by Grant at 1:27 PM