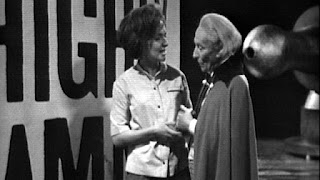 It is 14 November 1964, and time for the final episode of the Doctor Who serial "Planet of Giants".

If Forrester is not stopped, his insecticide DN6 may wind up killing all life on Earth. The Doctor (William Hartnell) and his companions are fighting to stop him, but at one inch in height what can they possibly achieve? Barbara remains poisoned after touching DN6-coated grain, and her only hope of survival is to get back inside the TARDIS in time for the Doctor to restore everyone to their true height.

There's a great pace to "Crisis". I suspect that mostly comes down to the fact that the broadcast episode is actually an edit of two separate episodes crammed together: "Crisis" and "The Urge to Live". After the episodes were completed, the production team was ordered to combine them because the BBC Head of Drama found them drawn-out and boring. Sadly, as was the BBC's wont at the time, the original edits were not kept. We will never get to see "Planet of Giants" as its writer Louis Marks intended. Thankfully the combined version is an acceptable substitute.

One of the things I really appreciate about "Planet of Giants" is its modest scale. Louis Marks' script does generate a global crisis in the back of someone's house, but the amount to which the Doctor can affect the story's outcome is minimal. He and his companions can jam a phone, and in the episode's climax they can make a rudimentary bomb, but that is pretty much the extent of it. In the end the crisis is averted not as much by the Doctor but by a sensible telephone exchange operator (Rosemary Johnson) and a local policeman (Fred Ferris).

This is the first Doctor Who serial since the very first episode to be set on contemporary Earth, and that makes Hilda the phone operator and Bert the policeman feel wildly out of place. We are now used to historical figures and rubber-suit monsters, not random middle-aged people from 1960s London. They do make for a surprisingly entertaining double act as their suspicions are raised and they begin to investigate Forrester (Alan Tilvern) and Smithers (Reginald Barratt). This remains a small, contained story throughout - in fact it's almost banal - and that gives the whole three episode serial a very curious but pleasant charm.

Three good episodes in a row keeps the Series 2 quality ratio at 100 per cent. We are off the a great start. Next week: the Daleks return.

The DVD release of "Planet of Giants" features a cobbled-together expansion of "Crisis" into two episodes again, utilising the original script, manipulated footage and fresh recordings of the dialogue by Carole Ann Ford, William Russell and a small group of 'soundalike' actors. While it is never going to replace the episodes that were lost, it is nonetheless an interesting substitute. It is special features like this that make the BBC's Doctor Who range the highest standard for classic television on home video.
Posted by Grant at 5:35 PM