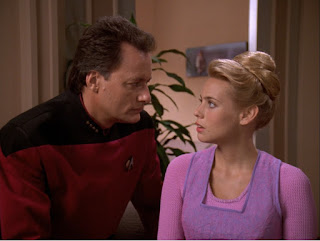 It is 26 October 1992, and time for another episode of Star Trek: The Next Generation.

An intern named Amanda Rogers (Olivia D'Abo) arrives on the Enterprise. In private she exhibits an unusual gift to generate objects and creatures with her mind. The inter-dimensional entity Q (John De Lancie) soon arrives, explaining that Amanda is the child of two members of the Q Continuum and that her growing powers could one day destroy the entire galaxy.

It has been a long time between drinks for Q, having skipped The Next Generation's fifth season entirely. The production team arguably over-compensates in the 1992-93 TV year, showcasing him in two episode of The Next Generation and a third over on Deep Space Nine. John De Lancie is an entertaining presence in any episode, but there can be too much of a good thing. This particular encounter is probably the weakest since "Hide and Q" all the way back in Season 1. It's not an awful episode, but there is a lot in here that could have been handled much better.

There is something about the episode that just feels tedious. Watching Amanda expand the scope of her powers while being egged on by Q simply veers from the silly to the vaguely irritating. It also commits a cardinal sin of episodic television: it focuses on the guest characters at the expense of the series regulars. That is an approach that can work - Season 7's "Lower Decks" does it masterfully - but here it replaces a solid regular cast with a rapidly tiring Q and a particularly bland guest star. I don't think it is Olivia D'Abo's fault per se, but it must be said she adds little herself to a deeply underwhelming and anodyne character.

Q also feels decidedly soft here. When he first appeared there was a sense of menace about him, then in Season 3's "Deja Q" there was the unexpected vulnerability and a change in personality from the arrogant to the fearful. Season 4's "Qpid" was a deliberate romp, which leaves this episode - his next appearance - without any particularly good angle to follow. He's too jolly at this stage, less of a serious and terrifying threat and more of an irritating uncle come to stay for the week. There is an attempt to add a bit of drama to the episode, as Q is revealed to be hiding a lot of information about Amanda's past and is secretly taking instructions from the Q Continuum throughout the story, but it jibes with the silly nature of the character at this stage.

This is not the worst episode The Next Generation has ever produced, but it is not a particularly successful one. It's worst crime is that in the end it is simply rather boring. There is potential in the premise, but it is largely squandered by a weak script. It leaves Season 6 with just three good episodes out of six, and a current quality ratio of 50 per cent.
Posted by Grant at 7:30 AM