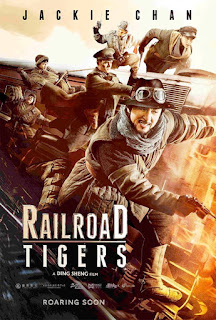 In December 1941 a group of Chinese railroad workers, led by the station porter Ma Yuan (Jackie Chan) engage in carefully staged raids of Japanese train shipments to disrupt Japan's military efforts to occupy China and invade other Asian nations to the south. When an injured soldier tells the group of a failed mission to blow up a strategically vital bridge, they take it upon themselves to complete the mission on the Chinese army's behalf.

Railroad Tigers is a hugely enjoyable slice of populist action-comedy, headlined by Jackie Chan in one of his most entertaining films in years. While the film has problems - in fact it has quite a few of them - none of them manage to fully obstruct what is ultimately a hell of a lot of fun. This is his third collaboration with director Ding Sheng, following Little Big Soldier in 2010 and Police Story 2013. To my mind this is the strongest of the three. It has plenty of action, a strong line in slapstick comedy, and makes the best use of its ageing star that I can remember.

Here's the thing: Jackie Chan is 62 years old. This seems to be a fact upon which every critic and reviewer dwells when judging his recent films. It is true that as an actor in his early sixties he is no longer capable of the over-the-top stunts and martial arts sequences upon which he built his reputation. Each of his new films seems to be met with cries that his films are not what they were, and that he is beginning to strain credulity with each subsequent new release. This is an opinion with which I emphatically disagree, and I think Railroad Tigers is excellent proof of that. It makes exceptional use of Chan's acting talents - particularly his gift for comedy - and while the film is packed with plenty of action it wisely shifts Chan from a star in his own right to a mentor figure and leader to an entire group of younger performers. As Ma Yuan he delivers an age-appropriate performance, with dignity, wisdom and confidence. If this is the direction in which he continues to push his career I think he will be a welcome presence on the screen for many more years to come.

Also hugely entertaining is Hiroyuki Ikeuchi as the dogged Japanese commander obsessed with tracking down and capturing the so-called "Railroad Tigers". His performance veers relatively close to excess, but he keeps it just reined in enough to remain on the right side of believable. The film spends quite a lot of time making fun of the Japanese soldiers and presenting them as foolish incompetent, however despite a long-running and genuine antagonism between China and Japan in this case the mockery feels about as racist towards the Japanese as Raiders of the Lost Ark was racist towards Germans. It occasionally puts a foot wrong - there is a rather bizarre and out-of-place gag about a Japanese officer attempting to commit ritual suicide, for example - but in the main it feels like broad comedy and relatively silly fun.

Generally speaking Railroad Tigers fits comfortably into a series of recent nationalistic pictures, that emphasise Chinese bravery in the face of foreign aggression. Andrew Lau's Legend of the Fist: The Return of Chen Zhen featured another World War II battle against the Japanese occupation, for example. To my mind the best of these films by far has been Teddy Chan's Bodyguards and Assassins. To an extent all of these films have a propaganda element to them, but to their credit it is often an element that actually works in their favour to make exciting and dramatic action films.

The film does have its fair share of problems. After a strong opening, it has a tendency to lag somewhat until it reaches its lengthy and prolonged climactic mission. The team of railway workers who undertake the raids with Ma Yuan never really get fully developed, and instead operate largely as archetypes. They have a tendency to call one another 'Brother' a lot, which has the potentially unintentional effect of making it near-impossible to learn and remember their names. The film is also unnecessarily framed by a short and pointless present-day sequence, complete with a jarringly inexplicable celebrity cameo. All faults for sure, but none big enough to stop the movie from being an awful lot of fun. Chan is on a really productive streak at the moment, with at least two more feature films coming down the line in 2017. Fingers crossed they utilise him as sensibly and usefully as Railway Tigers did.

Railway Tigers is screening now in Australian cinemas.
Posted by Grant at 7:53 AM