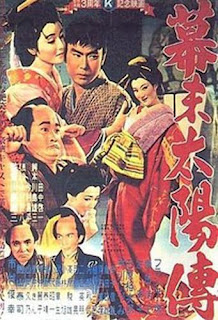 In the 1860s Japan is in a turbulent period of transition as the Americans' gunboat diplomacy forces the country to interact with a broader world. In a Tokyo brothel a grifter named Saheji (Frankie Sakai) overstays with no money, and is forced to work off his debt over the winter.

Sun in the Last Days of the Shogunate (released by Eureka's Masters of Cinema label under its Japanese title Bakumatsu Taiyoden) is a 1957 comedy directed by Yuzo Kawashima. In its own country it has been regarded as an all-time classic for many decades. A 2009 survey in the prestigious film journal Kinema Junpo ranked it as Japan's fourth-greatest film of all time, for example. Despite its local acclaim it has only recently become widely available to English-speaking audiences: better late than never.

This is a great movie comedy. While it does take a little while to build up steam, it is a beautifully performed farce with a nicely political edge, and a wonderful central performance by the stand-up comedian and actor Frankie Sakai.

In 1957 the Japanese government was preparing to enact legislation that would criminalise sex work, and bring to an end a long-running tradition of Japanese brothels. This film starts off explaining this fact, before jumping back a century to showcase such businesses in their cultural prime. From here the film's political views get a little complicated. On the one hand there seems to be a real affection for them: the sense of community, of men sharing time in the bathhouse, the ritual of drinking with geisha, and so on. On the other hand Kawashima applies a careful focus on the film's female characters as much as the men: they are seen working off family debts through sex work, getting sold into slavery by their gambling-addicted fathers, and constantly seeking a man entranced enough by them to marry them and rescue them from their lives. It is a delicate balancing act: presenting nostalgia while simultaneously poking holes in that nostalgia.

Our route into the world of the brothel is via Saheji (Frankie Sakai). He arrives with friends and racks up a huge bill on booze and food. He tells his friends to sneak out in the middle of the night, and that he will pay. He then strings the brothel staff along for days, fobbing off demands for payment and continuing to use their services. When the time comes to finally pay the bill, he admits he is stone broke and is forced to work off his debt over the winter as an attendant.

The genius of all of this is that this enforced servitude is exactly what Saheji wants. He is broke, and it's getting colder every night, and he is slowly recovering from tuberculosis. Working at the brothel means regular meals and a warm place to sleep. While there he performs every ruse and scam he can think of in order to make more money. By the end of winter not only he is still alive, well fed and returning to health, he's actually made a profit on the deal.

Sakai is marvellous. His comic timing is perfect, and he has a real gift for drawing the best possible humour out of each situation and gag. While the film is ultimately an ensemble piece, his is the performance that draws it all together and pushes the movie from being a good film to being a great one.

The movie is, in many respects, the Japanese version of an English farce: characters misunderstanding one another, situations running out of control, and deceptions collapsing at the worst possible moment. Not only does it perfect that kind of humour, it manages to transcend it. At the end of winter, Saheji wakes up early, packs his things, and quietly leaves the building unseen. It is a startlingly gentle and heartfelt moment. He stops being a comic protagonist and suddenly feels like an actual person. This remarkable scene is to my mind the film's crowning glory. The fifth-best Japanese film ever? I honestly could not say. What I can say is that Sun in the Last Days of the Shogunate is a great film: warm, funny, inventive and wonderful.
Posted by Grant at 8:33 PM